The two leaders met at the White House on Monday for talks amid growing calls for war with Iran.

Both said little in their brief public statements delivered before a longer private meeting, where aides said Netanyahu would push the US government to take a more aggressive stance on Iran’s nuclear programme.

There has been widespread speculation, in the press and in public statements by Israeli officials, that Israel could attack Iran this summer.

The Obama administration has not said whether it would support such a move, and in recent weeks has said it sees no evidence that Iran is building a nuclear weapon.

In his statement, Obama largely echoed points he made on Sunday night in an address to the American Israel Public Affairs Committee (AIPAC), the powerful pro-Israel lobbying group.

“I know that both the prime minister and I prefer to resolve this diplomatically,” he said. “We understand the costs of military action.”

Netanyahu left the door open to unilateral military action, saying that Israel reserves the “sovereign right” to “defend itself, by itself.”

The White House meeting came against the backdrop of AIPAC’s annual conference, with the group’s members expected to fan out across Capitol Hill to pressure legislators in the lead-up to the November US elections.

In his remarks on Monday, and his speech the night before, Obama urged Israel to allow time for sanctions against Iran to work, but promised to leave “all options on the table.”

“Iran’s leaders should understand that I do not have a policy of containment,” he said in the AIPAC speech. “I have a policy to prevent Iran from obtaining a nuclear weapon.”

Netanyahu’s government, and AIPAC’s leadership, wanted Obama to go further. He wants Obama to lay down “red lines” – a clear statement of when the US would attack Iran over its nuclear programme.

Netanyahu was scheduled to deliver his own speech to the AIPAC conference on Monday night.

AIPAC, meanwhile, is circulating flyers which describe an Iran with even the capability to build nuclear weapons as “unacceptable.”

Any country with a well-developed peaceful nuclear programme has a degree of “breakout capacity,” the ability to quickly build a nuclear device. AIPAC’s position, which is shared by many in Netanyahu’s inner circle, would call for a strike on Iran once its nuclear programme reached a certain point, even if the Iranian leadership was not actively building a nuclear weapon.

James Clapper, the US director of national intelligence, testified before congress in January that he believed Iran had not yet decided whether or not to build a bomb.

International negotiations over Iran’s nuclear programme have been stalled for more than a year, but the Iranian government abruptly announced last month that it would be willing to resume talks without any preconditions.

However, the White House has apparently rejected that demand, which Iran would almost certainly refuse; Obama told AIPAC he still believed a diplomatic solution was possible.

The Obama-Netanyahu meeting has been the subject of intense speculation in the Israeli and American press. Yediot Aharonot called it “Netanyahu’s moment of truth”, forcing Netanyahu to decide whether to support Obama or “collide” with him.

The Jerusalem Post compared the two world leaders to courting teenagers, “sending messages to each other through emissaries before their big rendezvous”.

Gideon Levy, a columnist for the liberal newspaper Haaretz, argued that Netanyahu’s aggressive lobbying on Iran could eventually undercut US support for Israel.

“Netanyahu’s Israel has dictated the global agenda as no small state has ever done before, just as its international standing is at its nadir and its dependence on the United States at a zenith,” he wrote.

Obama sought to tone down some of that speculation during his AIPAC speech; Netanyahu, too, has reportedly instructed his aides to stop talking to the press about Iran.

“Already there is too much loose talk of war,” Obama said. “For the sake of Israel’s security, America’s security, and the peace and security of the world, now is not the time for bluster.”

The Iranian nuclear programme has also become an election-year issue in the US, where all of the Republican presidential candidates have been sharply critical of Obama’s approach to Iran.

Mitt Romney, the former Massachusetts governor and front-runner in the Republican primary race, told an audience shortly after Obama’s speech that “if Barack Obama is re-elected, Iran will have a nuclear weapon”.

Three of the Republican candidates – Romney, Newt Gingrich and Rick Santorum – were scheduled to address the AIPAC conference on Tuesday. 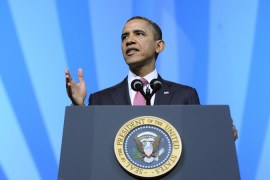 Obama warns of ‘loose talk of war’ over Iran

US president calls on Israel to allow time for sanctions against Tehran to work, but says no options are off the table.

What is really happening in Iran?

Supreme Leader Ayatollah Khamenei may control the nuclear programme, but he lacks a critical mass of Iranians. 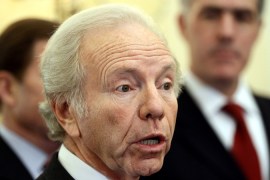 If a bill pushed by Lieberman passes, it could give the US “political authorisation for military force” against Iran. 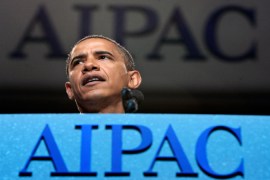 Lobbying for a US war with Iran, AIPAC is pushing a bill that would prohibit diplomacy between the two nations.