A delegation of West African leaders has abandoned its trip to Mali to negotiate with the leaders of last week’s coup after pro-junta demonstrators staged a sit-in on the airport tarmac in Bamako, the capital,

An official at Ivory Coast’s presidency on Thursday said an airplane carrying President Alassane Ouattara, one of a delegation of six heads of state from the Economic Community of West African States (ECOWAS) had returned to the capital Abidjan.

“Everyone is heading home,” one of the diplomats told Reuters, asking not to be named.

Kady Traore, a spokesperson for Ouattara, told Reuters the Ivory Coast leader was “on the plane with the delegation headed to Bamako and it was during the flight that they heard about the protests, and they turned around”.

Shortly after Ouattara left Abidjan, scores of pro-junta supporters swarmed the runway at Bamako’s airport to prevent the arrival of the team, AFP reported.

“About half an hour into the arrival dozens of coup leader protesters marched into the trarmac,” Al Jazeera’s Hashem Ahelbarra reported from Bamako.

“However sources from the ECOWAS tell Al Jazeera that delegation may perhaps return within two or three days,” our correspondent added.

Mali’s opposition parties have said they will support a plan devised by the ECOWAS which has called on the leaders of the coup to restore power to the toppled president.

The 15-nation bloc ECOWAS suspended Mali from the organisation during a meeting on Tuesday, following in the footsteps of the African Union as the international community roundly condemned the takeover.

President Toure, 63, was chased out of power just five weeks before the end of his term in office ahead of elections on April 29, by soldiers angry at his handling of a two-month old Tuareg rebellion in the north.

His whereabouts have been unknown since he was overthrown. But he told AFP on Wednesday that he was safe in Bamako and was not being held by the coup leaders.

“I am indeed in Bamako, and thank God my family and I are doing well,” Toure said in a brief telephone conversation.

“I am obviously following what is happening, I wish with all my heart that peace and democracy triumph in Mali. I have nothing else to say for the moment.”

Al Jazeera’s Ahelbarra said there were conflicting reports over the current location of the president.

Ahelbarra said that the military leaders of ECOWAS had made it quite clear to Captain Sanogo that there was no way out of the crisis “but for him to step aside and restore the legitimate authority of the president”.

“If he rejects the offer, they will push further for economic sanctions.” our correspondent said. “It is an incredibly delicate moment for Captain Sanogo with the mounting international pressure.”

ECOWAS has said its regional troops are on standby and it has not ruled out the use of force.

Mali meanwhile remains divided over the coup. The majority of the political class has called for a return to constitutional order, but a pro-junta camp has also formed and on Wednesday several thousand marched in favour of Sanogo.

“It’s the first show of public support,” Ahelbarra reported, adding that some people claimed it was choreographed by coup leader Sanogo.

“He has to show the world that he’s popular, that people love him, that people are taking to the streets to defend his policies.”

Earlier, the coup leaders had unveiled a new constitution and pledged to hold elections, without specifiying a date.

The leaders said none of them would stand in the upcoming elections. 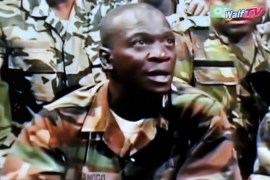 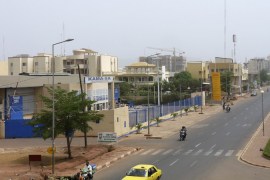 Fuel stations and market stalls reopen after decrease in gunfire and looting that followed coup in West African nation. 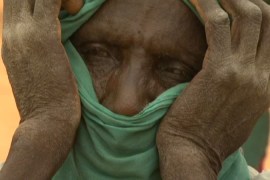