The rallies were a show of defiance coming days after a government commission praised the king’s progress in implementing reforms since widespread protest began last year.

The marches were soon overshadowed by clashes that erupted in Sanabis and Sitra, two predominantly Shia villages.

The streets of Sitra were littered with broken glass and the chunks of cement that protesters used as makeshift roadblocks. Tear gas and thick black smoke from burning rubbish bins lingered in the air.

Clashes also broke out in Jidhafs, where mourners buried a woman who human rights groups said was killed by tear gas last night.

Police used water cannons and armoured vehicles to break up hundreds of protesters as they approached a checkpoint near Pearl Roundabout in Manama, the focal point of protests last year.

Several hundred riot police with batons and shields fired tear gas into the neighbourhood as youths taunted them from a distance. At times, the protesters grabbed tear gas canisters and hurled them back.

“Come and fight hand to hand, you cowards, you animals!” one teenager shouted before throwing a rock at police.

The largest of the Wefaq rallies, on a highway just west of the capital, drew some 5,000 marchers. The party has always been cautious in its criticism of the ruling monarchy, and that restraint was on display during the rally.

Organisers passed out signs with slogans such as “No to sectarianism”.

A Wefaq official, perched atop a truck outfitted with loudspeakers, led the crowd in chants criticising the prime minister and condemning the routine violence in Bahrain’s villages.

The activist was frequently drowned out by chants of yasqat Hamad (Down with Hamad), a reference to King Hamad bin Isa Al Khalifa.

A group of marchers from the February 14 Movement, a loose coalition of youth activists, held a sign demanding “Trials for the killers and torturers”.

Bahrain’s justice ministry has said that more than 50 officers are being investigated for abuses committed last year. So far, however, only a handful of officers have been put on trial and no high-level officials have been targeted.

Jabbar al-Qattan, carrying a photo of his 16-year-old son Ahmed who was shot and killed by police in October, in the village of Abu Saiba, said nobody has been prosecuted over the incident. He accused police of doctoring the official report to hide their involvement.

“The police changed the report to say the shotgun wasn’t one of theirs,” al-Qattan said. “But how is that possible? How is it there is a shotgun in Bahrain they don’t know about?”

The issue of accountability is one reason why the opposition dismisses the findings of the National Commission, which presented its report to the king on Tuesday.

The commission was a follow-up to an earlier panel, the Bahrain Independent Commission of Inquiry (BICI), which documented widespread abuses during last year’s unrest and recommended more than two dozen reforms.

Rights groups say at least three people have been killed by tear gas during the last week, including the woman buried in Jidhafs on Friday. 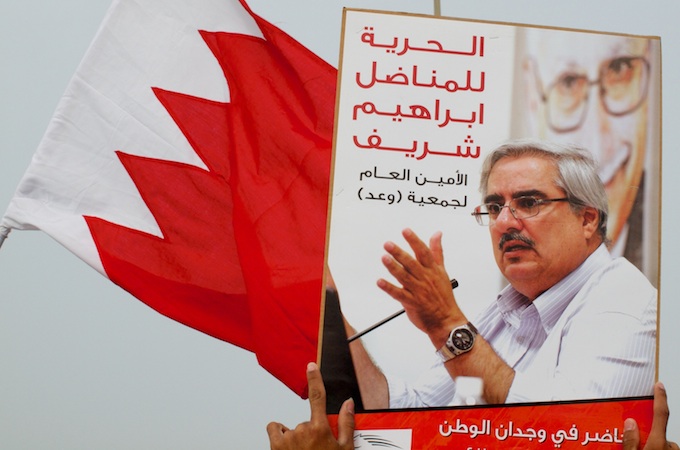 Many protesters held signs calling for the release of Ibrahim Sharif, a jailed opposition leader

The police have significantly increased their use of tear gas over the last few months. The change in tactics was acknowledged by John Timoney, the former Miami police chief hired as a consultant in Bahrain after the BICI report.

Timoney attributed the change to what he called the growing use of petrol bombs by protesters.

“I count in some situations now dozens upon dozens being thrown… [We] want to create distance between [the police] and the people throwing the Molotovs,” he said earlier this week.

Timoney was the subject of particular scorn from protesters, several of whom referred to him dismissively as “that American”.

There is a growing frustration here with the US, which has been reluctant to condemn abuses committed by the Bahraini government.

“How many people have to die from this tear gas from the United States?” Saeed said. “You don’t have to support us. But just stay away, stay neutral, and let us have our rights.”

Washington has pushed the Bahraini government to open another round of talks with Wefaq, according to a senior Western diplomat in Manama.

Negotiations have been stalled since last summer, when Wefaq backed out of a much-heralded “national dialogue” which many opposition leaders now dismiss as not serious.

Protesters at Friday’s rally said they were open to another round of dialogue. “Force will not solve this problem,” one man said.

Dozens of protesters held posters calling for the release of Ibrahim Sharif, the leader of the secular leftist Wa’ad party, convicted last year in a military court and sentenced to life imprisonment.

Many opposition activists say Sharif must be released to represent the opposition in any dialogue.

“He scares the government because he is Sunni, because he proves this is not sectarian,” said Ali, an investment banker at the protest who declined to give a second name.