Authorities in New Zealand have decided to demolish a 131-year-old Anglican cathedral in Christchurch, after it was badly damaged in last year’s devastating earthquake, the city’s bishop says.

The Victorian-era, Gothic-style cathedral, which dominated the city’s central square, was badly damaged in the February 2011 earthquake, which killed 185 people and destroyed large areas of the business centre and more than 6,000 homes.

Bishop Victoria Matthews said on Friday that rebuilding the landmark, which sustained further damage from severe aftershocks, would be too dangerous and expensive.

“The decision we have made has been made with prayer, with great deliberation, and an utmost concern for safety,” Bishop Matthews told reporters.

The landmark cathedral was a favourite meeting place and tourist attraction, and its spire was a symbol of the city.

Matthews said the cost of rebuilding the church would have been “staggering” – an estimated $42 million to rebuild using existing parts of the building or $84 million for a complete reconstruction.

She said the Anglican Church was committed to creating “a beautiful, inspiring, safe new cathedral” but no decision had been made on where it would be built and what it would look like.

The cathedral would be demolished gradually and carefully to a height of two or three metres in order to salvage historic features, she said.

“There will be no bulldozers, there will be no wrecking balls, this will be done with deep love and respect for a building that has served us so well,” Matthews said.

But Aaron Keown, a city councillor, vowed to stop the demolition and said his position enjoyed widespread support amongst citizens who believed the church should be rebuilt at any cost.

“I would be in there chaining myself to the building to stop that and I know lots of other volunteers would come in to do that,” he told the Christchurch Press newspaper.

Matthews said she recognised there were strong feelings in the city about the issue but said the church “would not be responsible stewards if we ignored the financial realities”.

“We acknowledge the high level of community interest and sense of ownership as the cathedral was both an iconic building and a place of regular worship by many,” she said.

“However, this is now a very dangerous building that needs to be made safe.”

New Zealand is facing a $16.5 billion bill to rebuild its second largest city, the centre of which remains a restricted area, even a year after the earthquake.

Whole city blocks have been reduced to bare land.

Thousands of tremors, some with magnitudes of up to 6, have delayed reconstruction work. Large areas of the city’s suburbs have also been hit by liquefaction – the forcing up of slushy silt through streets – and their habitability is still being assessed.

Bob Parker, the mayor of Christchurch, said the decision to demolish the church was “heartbreaking”.

“It is not an easy decision for many of us to accept,” he said. 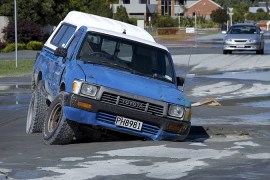 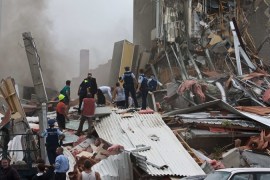 Tremor was not as strong as initial quake, but there are several reasons for its destructive nature.