Thousands of mourners have flocked to Cairo’s St. Mark’s Cathedral to pay their final respects to Pope Shenouda III, the longtime head of the Coptic Church who died on Saturday at the age of 88.

Lengthy queues looped through the streets of Cairo’s Abbasiya district from Saturday night into Sunday afternoon, eventually becoming so thick that three people died from suffocation, the country’s health ministry said. At least 30 more were reportedly injured, prompting the country’s military rulers to call a halt to the ceremony.

Before the deaths were reported, huge crowds streamed to see Shenouda’s body, which was initially laid in a coffin and later seated on a ceremonial throne dressed in gold and red embroidered religious vestments, with a golden mitre on Shenouda’s head and a gold-topped staff leaning on his arm.

The Supreme Council of the Armed Forces announced that Shenouda’s body would be flown on a military plane on Tuesday to Wadi al-Natroun, a Coptic monastic centre located in the desert of the northwest Nile Delta, for Shenouda’s funeral.

Coptic bishops have arrived from around the world to attend the funeral and discuss plans to find a successor to take the reins of the church after four decades of Shenouda’s leadership.

Al Jazeera’s Rawya Rageh, reporting from outside St. Mark’s in Cairo, said that the streets were “flooded with mourners dressed in black.”

“Thousands of people are coming here to get a chance to have a last glimpse of the pope who is seated here in full attire in the papal chair in the main cathedral hall,” Rageh said.

“You could see a lot of grief here … people are coming from all around the country not just from Cairo and surrounding cities but as far as Upper Egypt deep in the countries south.”

Bishop Pachomious of the Nile Delta province of Beheira has taken over papal duties for two months until a council of senior clergy meet to choose a new pope, state television said.

The spiritual leader of the Middle East’s largest Christian minority had suffered health problems for years, travelling to the United States frequently for treatment.

Shenouda died in his residence at the cathedral, and the state news agency MENA said he had been battling liver and lung problems for several years. Health issues forced him to cancel his weekly sermon on Wednesday.

“He died from complications in health and from old age,” his political adviser Hany Aziz said.

Condolences poured in from Egypt’s Muslim leaders and from politicians.

“Egypt has lost one of its rare men at a sensitive moment when it most needs the wisest of its wise – their expertise and their purity of minds,” said Sheikh Ahmed el-Tayib, grand imam of Egypt’s highest Islamic authority, al-Azhar.

The Vatican also paid tribute to Shenouda and said that Pope Benedict XVI had offered “prayers of suffrage”.

“The Catholic Church shares in the grief and prayers of Coptic Christians in mourning the loss of their spiritual leader… May the Lord welcome this great shepherd and give him the reward he deserves for his service,” a statement said.

Shenouda’s successor will play a central role in forging the church’s position in the country after the overthrow of President Hosni Mubarak last year. Islamist parties have since emerged as a dominant political force in parliamentary elections.

Shenouda led the Coptic Orthodox Church through 40 years of quiet expansion, including a strong growth in North America.

Most of the church’s more than 10 million members are in Egypt, where Copts are believed to make up around 10 per cent of the population of around 80 million.

For Egypt’s Christians, Shenouda was a charismatic leader, known for his sense of humour, whose smiling portrait was hung in many Coptic homes and shops. But in recent years, some criticised him for not speaking out on Coptic rights, particularly as sectarian violence seemed to increase.

The later part of his papacy was marked by co-operation with Mubarak and, after the revolt, the Supreme Council of the Armed Forces. When sectarian clashes began to erupt after Mubarak’s removal, including church burnings throughout the country, Shenouda praised the military leadership for helping to rebuild.

But in October, when soldiers brutally dispersed a Coptic protest outside state media headquarters, leaving at least 26 people dead, Shenouda declared that those killed were martyrs and blamed the military for the violence.

“These martyrs are our beloved children and their blood does not come cheap,” he said. “I, along with all the bishops, priests and monks, will pray for them. And we know that God will forgive their sins.”

Shenouda worked as a journalist before spending years as a monk and being elected pope.

In the 1980s, he spent more than three years in exile in a desert monastery after former President Anwar Sadat stripped him of his powers by decree.

At the time, Shenouda had been pressing for more rights for the Coptic community and trying to preserve his congregation from escalating attacks by Muslim extremists.

Mubarak cancelled Sadat’s decree in 1985, and Shenouda returned to lead Christmas Mass before a crowd of thousands in St Mark’s Cathedral. 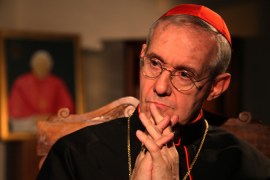 The Vatican’s top official responsible for relations with the Muslim world explains why Christians flee the Middle East. 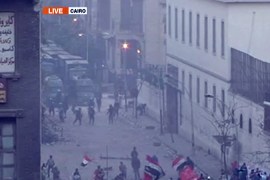 Spectacle and political power in Egypt

The military’s responses to recent unrest shows it is learning to use manipulate events to its own political advantage. 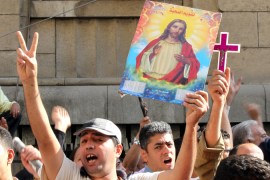 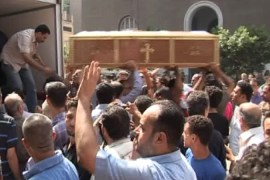 Public figures, infiltrators and even the Coptic Christian protesters themselves are blamed for Sunday’s deadly riots.