Nigeria’s government and Boko Haram have been in indirect talks to end deadly violence blamed on the Islamist group, sources familiar with the discussions have revealed.

“There have been preliminary talks between a Boko Haram-appointed intermediary,” a senior security official told the AFP news agency on condition of anonymity, adding that Boko Haram has set out terms for a temporary ceasefire.

The diplomatic source said contact had been made between Nigeria’s government and Boko Haram through intermediaries.

The security official said Boko Haram has proposed a three-month truce if all of its detained members are released and if the government halts any further arrests. He said the government was looking at the proposal.

The news of planned negotiations comes as more violence was reported in the troubled town of Maiduguri, in northern Nigeria.

Authories said two people were killed on Thursday by gunmen suspected to be members of Boko Haram.

Al Jazeera’s Yvonne Ndege, reporting from the capital Abuja, said that the biggest challenge for Nigerian authorities would be establishing who represents and speaks for the hardline group.

“The Nigerian police have gathered intelligence from suspects arrested, but the leaders are still at large and one can imagine that there will be a level of uncertainty on the part of the authorities that they are engaging the right people.

Andrew Stroehlein, communications director of the International Crisis Group in Brussels, told Al Jazeera that while talks were a positive development, there were a range of difficult questions to consider.

“First of all, it is not sure that they are talking to the right people, especially with the factionalism prevalent in Boko Haram. This means that even if they reach an agreement, this does not mean that the agreement will be honoured,” he said.

Government officials either declined comment on the information or could not be reached.

Boko Haram has been blamed for scores of shootings and bomb blasts, mostly in northern Nigeria, which have killed more than 1,000 people since 2009.

It claimed responsibility for an August suicide attack at the UN headquarters in the capital Abuja which killed 25 people.

The group had initially claimed to be fighting for the creation of an Islamic state in northern Nigeria, but its aims and structure have since become less clear, while its attacks have grown increasingly deadly and sophisticated.

Calls have mounted for talks to take place, with Nigerian authorities seemingly unable to stop attacks by the group, which have shaken Africa’s most populous nation and largest oil producer.

While there have been no attacks on the scale of the Kano carnage since January, sporadic violence has continued, including bombings of police stations and attacks on checkpoints.

Boko Haram is believed to have a number of factions, but the indirect talks were said to be with the main branch of the group led by Abubakar Shekau.

Last week’s killing of a British and an Italian hostage in northwestern Nigeria was blamed on a splinter faction of Boko Haram, though many have expressed doubts over the group’s alleged involvement.

Boko Haram had not been previously known to carry out kidnappings, and a spokesman for the group has denied responsibility.

There has been intense speculation over whether Boko Haram has ties to outside groups, including al-Qaeda’s north African branch.

Diplomats say such links have been limited to training for certain Boko Haram members and that there has been no evidence of operational ties.

According to the security official quoted by the AFP, one of the intermediaries for the indirect talks was a northern religious scholar trusted by Boko Haram.

“The problem is not about the sect’s readiness for dialogue, but winning their trust and confidence that the government is genuine in its intentions because they still have the fear of betrayal and back-stabbing on the part of  the government,” the official said.

“The leaders are afraid that they could be arrested once they come out for direct talks. The major hurdle is to win their confidence that nothing will befall them if they show their faces.”

The diplomatic source could not provide details, but said there had been “real contacts” between the government and Boko Haram through intermediaries.

A previous attempt to engage Boko Haram in talks early last year failed when the group objected to the demand that they surrender their arms as a condition for a peace agreement that would have involved an amnesty, the security official said.

Those talks were mediated by a former state governor, he said. 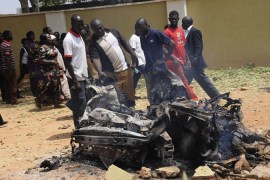 President Goodluck Jonathan condemns the attack and vows “to end the spate of mindless attacks and killings”.