The United States, its European allies and the UN chief have slammed Syrian President Bashar al-Assad for a year-long assault on anti-government protests that has killed thousands of civilians and brought Syria to the brink of civil war.

Western nations also stepped up pleas to Russia and China on Monday to end their blockage on UN Security Council action over the Syrian government’s deadly assault on protest cities.

But Russia showed little sign that it would change its stance at the meeting, with Sergei Lavrov, the Russian foreign minister, slamming “risky recipes” which he said risked increasing conflict in the Middle East.

“I add my voice to that of Mr Annan in urging President Assad to act swiftly, within the next few days, in response to the proposals put forward” by the envoy, Ban Ki-moon, the UN secretary-general, told the meeting.

“I appeal to the Security Council to unite strongly behind ending the violence and supporting Mr Annan’s mission to help Syria pull back from the brink of a deeper catastrophe,” he added.

“As we saw at this meeting, the international community remains divided. [UN Secretary-General] Ban Ki-moon is calling on everyone in the council to speak with one voice to end the bloodshed on Syria, but there seems to be serious differences on how to proceed.”

Russia and China have twice used their powers as permanent council members to veto resolutions on Syria, saying they were unbalanced and only sought regime change.

The other permanent members – the United States, Britain and France – stepped up their condemnation of Assad, but also urged Russia and China to agree a resolution.

Alain Juppe, the French foreign minister, appealed directly to Russia and China, while also calling on the council to call for an International Criminal Court investigation into the Syria crackdown, where the UN says more than 7,500 people have died in the past year.

“After months of blocking, I appeal to China and Russia to hear the voices of the Arabs and the world conscience and join us,” Juppe said.

Hillary Clinton, the US secretary of state, told the council: “We believe that now is the time for all nations, even those who have previously blocked our efforts, to stand behind the humanitarian and political approach spelled out by the Arab League.

“The international community should say with one voice, without hesitation or caveat, that the killing of innocent Syrians must stop and a political transition must begin,” Clinton said.

William Hague, Britain’s foreign secretary whose country organised the debate as president of the council for March, said the “the situation in Syria casts a long shadow over this debate”.

“In the eyes of the overwhelming majority of the world, this council has so far failed in its responsibilities toward the Syrian people.”

But Lavrov maintained his argument against “unilateral” UN action, and repeated Russia’s condemnation of NATO’s airstrikes in Libya to justify its opposition to the West’s campaign on Syria.

Change in the Arab world “must not be achieved by misleading the international community or manipulating the Security Council”, Lavrov said.

“There is no doubt whatsoever that the Syrian authorities bear a huge share of responsibility for the situation,” Lavrov said, but he added that the government was now fighting armed groups, not just unarmed protesters.

Lavrov condemned “making hasty demands for regime change, imposing unilateral sanctions designed to trigger economic difficulties and social tensions in countries and inducing the opposition to continue its confrontation with authorities instead of promoting dialogue”.

All were, he added, “risky recipes of geopolitical engineering which can only result in a spread of the conflict.”

Meanwhile, UN-Arab League envoy Kofi Annan said the world must send a clear and united message that the killing of civilians in Syria was “simply unacceptable,” as he arrived in Turkey after weekend talks with Assad.

Annan said he was trying to get everybody to the table through a political process, while ensuring that humanitarian
access was opened and the killing of civilians stopped.

“Since I came to the region I am following very, very closely developments in Syria and there are grave and appalling
reports of atrocities and abuses,” Annan told reporters in Ankara on Monday, before meeting Recep Tayyip Erdogan, the Turkish prime minister.

“Killings of civilians must end now. The world must send a clear and united message that this is simply unacceptable.”

Annan, who held talks with Qatari leaders before visiting Turkey, said he was trying to bring about a solution as swiftly
as possible, and provide relief to civilians in the areas worst hit by the fighting between forces loyal to Assad and rebels. 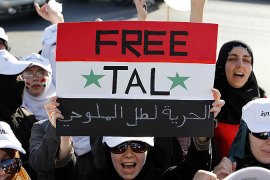 Protests continue in Syria despite security crackdown. We bring you the latest news from various sources. 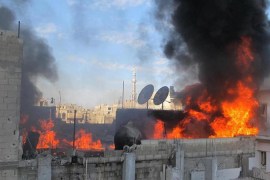 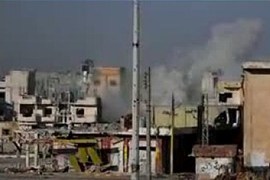