Anger is growing in central Nigeria after a spate of violent reprisal attacks have hit a number of towns in the aftermath of an attack on a church in the town of Jos.

News agencies reported on Monday a series of drive by shootings, including attacks on policemen in Nigeria’s second largest city of Kano, as confidence in the country’s security establishments continue to wane.

The violence comes after a suicide bombing of a Catholic church in Jos and retaliatory violence on Sunday left 14 people dead.

Nigerian President Goodluck Jonathan on Monday condemned Sunday’s bombing at a Catholic church and reaffirmed his government’s determination “to end the spate of mindless attacks and killings”.

The bomb exploded as worshippers attended the final Mass of the day in Jos, a city where thousands have died in the last decade in religious and ethnic violence.

Security at the gate of the church’s compound stopped the suspicious car and the bomber detonated his explosives during an altercation that followed, Pam Ayuba, Plateau state spokesman, said.

Several soldiers were also wounded in the blast.

No group immediately claimed responsibility though the city has been targeted in the past by a radical Islamist group known as Boko Haram.

Jos lies in the so-called middle belt region dividing the mainly Muslim north and predominantly Christian south, and hundreds of people have been killed in clashes in the city between Muslim and Christian ethnic groups in recent years.

Boko Haram claimed a series of bombings in Jos on Christmas Eve in 2010 that killed as many as 80 people.

The group also claimed a similar church bombing on February 26 on the main headquarters of the Church of Christ, which killed three people and wounded 38 others.

Al Jazeera’s Yvonne Ndege, reporting from Lagos, said that the bombings have the hallmark of Boko Haram, though no one has claimed responsibility for the attack.

“Bomb blasts are becoming a weekly occurrence in Nigeria and people in the affected states are feeling increasingly vulnerable,” she said.

Violence blamed on Boko Haram has since 2009 has claimed more than 1,000 lives, including more than 300 this year, according to figures tallied by the AFP news agency and rights groups. 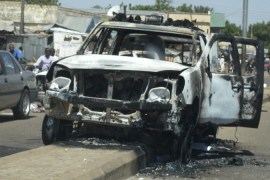 Who are Nigeria’s Boko Haram?

Inside Story asks what motivates the group’s increasing violence in Africa’s most populous country. 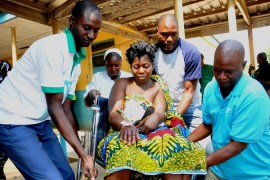 As Nigeria enters the New Year under a state of emergency, how worrying is Boko Haram’s growing violence?