The Syrian president has told Kofi Annan, the UN and Arab League envoy, that no political solution is possible in Syria while “terrorist” groups are destabilising the country.

Annan, who is set to meet Bashar al-Assad in Damascus for a second day of talks on Sunday, offered no immediate comment after the meeting, aimed at halting bloodshed that has cost thousands of lives since a popular uprising erupted a year ago.

“Syria is ready to make a success of any honest effort to find a solution for the events it is witnessing,” state news agency SANA quoted Assad as telling Annan during two hours of talks on Saturday.

“No political dialogue or political activity can succeed while there are armed terrorist groups operating and spreading chaos and instability.”

Annan, a former UN secretary-general, is due to meet Syrian dissidents before leaving Damascus on Sunday.

Annan has called for a political solution, but the opposition says the time for dialogue is long gone.

While Assad and Annan discussed the crisis, Syrian government forces were stepping up attacks on the northern city of Idlib, an opposition bastion, for a third straight day, in their latest onslaught on opposition fighters and civilians.

The troops attacked Idlib for hours with dozens of tank shells as the forces moved to encircle the town, an Associated Press news agency team in Idlib reported.

Syrian forces had been building up for days around Idlib, the capital of a hilly, agricultural province along the Syria-Turkey border that has been a centre of anti-government protests.

Families have fled their homes, carrying blankets and a few other meagre belongings. Others have huddled in homes.

The Turkey-based armed opposition faction, the Free Syrian Army (FSA), has claimed it is making gains against government forces.

Speaking to Al Jazeera from the Turkish-Syrian border, Riad al-Assad, FSA’s commander, said: “While dealing with these brute forces and criminals, we managed to hit one of their helicopters and destroy six tanks. Also, 30 men from the regime’s armed forces have defected with two tanks.”

The Associated Press news agency quoted Fadi al-Yassin, an activist in Idlib, as saying: “The [FSA] will able to keep them out for a while, but if they cannot get more weapons and if the army keeps shelling from outside, they won’t be able to hold out.

“Right now their morale is very high. [But] we worry that what happened in Baba Amr will happen here.”

Al-Yassin estimated that the city had as many as 1,000 FSA fighters, but that they possessed mostly light arms and are short on ammunition. Most supply lines have been cut.

Sergei Lavrov, Russia’s foreign minister who met Annan in Cairo on Saturday, told the Arab League his country was “not protecting any regime”, but did not believe the Syrian crisis could be blamed on one side alone.

He called for a ceasefire and humanitarian aid access, but Qatar and Saudi Arabia sharply criticised Moscow’s stance.

“What is important for Russia, and Sergei Lavrov made it very clear today, is for both sides to withdraw their fighters from the cities and for the onus on both sides. Then, move forward to a ceasefire and access to humanitarian aid,” she said.

“This raises interesting questions. Who is going to monitor the ceasefire? But what is important is that [Russia and other nations] are at the dialogue table. Both sides are offereing compromise here and this will all be brought to the Security Council.”

Sheikh Hamad bin Jassim Al Thani, Qatar’s prime minister who has led calls for Assad to be isolated and for the Syrian oppositon to be armed, said a ceasefire was not enough.

Syrian leaders must be held to account and political prisoners freed, he declared.

“We must send a message to the Syrian regime that the world’s patience and our patience has run out, as has the time for silence about its practices,” Sheikh Hamad said.

Saud al-Faisal, foreign minister of Saudi Arabia, said shortcomings in the Security Council, where Russia and China have twice vetoed resolutions on Syria, had allowed the killing to go on.

Their position, he said, “gave the Syrian regime a licence to extend its brutal practices against the Syrian people”.

International rifts have paralysed action on Syria, with Russia and China opposing Western and Arab calls for Assad, who inherited power from his father nearly 12 years ago, to quit.

Lavrov told Arab ministers in Cairo that a new Security Council resolution had a chance of being approved if it was not driven by a desire to let the armed opposition take control of Syria’s streets.

The US has drafted a fresh resolution, but the state department said on Friday it was not optimistic that its text would be accepted by the Security Council.

France says it will oppose any measure that holds the Syrian government and its foes equally responsible for the bloodshed.

Despite their differences, Lavrov and Arab ministers said they had agreed on the need for an end to violence in Syria.

They also called for unbiased monitoring of events there, opposition to foreign intervention, delivery of humanitarian aid and support for Annan’s peace efforts.

Russia, one of Syria’s few foreign friends and its main arms supplier, could play a pivotal role in any negotiated solution.

Chinese and Russian reluctance to approve any UN resolution on Syria arises partly from their fear that it could
be used to justify a Libya-style military intervention, although Western powers deny any intention to go to war in Syria.

The world powers are on course for a new diplomatic clash over Syria when foreign ministers from the main UN Security Council nations meet on Monday.

What was intended by the British organisers of the event to be a review of the Arab Spring uprisings will be overshadowed by the divide over how to stop Assad’s crackdown.

Hillary Clinton, the US secretary of state, and Lavrov of Russia, William Hague of Britain, Alain Juppe of France and Guido Westerwelle of Germany will be among senior officials at the event. 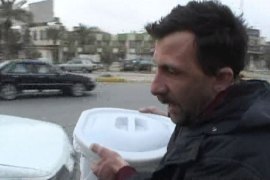 Dream of resettlement swapped for the relative safety of own country as uprising against Assad’s rule rages on. 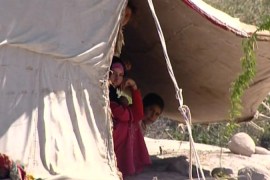 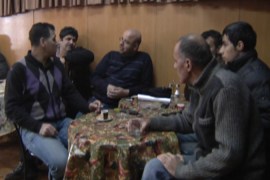