Millions have voted in India’s most populous and politically important state, Uttar Pradesh, in the first of the seven-phase elections, being seen as a mid-term report card for the federal government.

Voting turnout was about 62 per cent when the polling ended for the 55 constituencies on Wednesday, despite rains playing spoilsport in the morning, NDTV, a private news channel based in New Delhi, reported.

Voting for 403 state assembly constituencies in the northern state, with a population of 200 million, is spread over seven phases and will last until March 3.

“This is a lengthy and complicated process to provide a level playing ground to all the political parties,” Chief Electoral Officer Umesh Sinha said.

More than 900 video cameras and 1,800 digital cameras will be used to monitor the polls and provide live webcasts, he said. More than 1.8 million government employees and 380,000 paramilitary soldiers were supervising the poll.

Uttar Pradesh is one among the five states holding elections for new provincial assemblies. Results will be declared on March 6.

The elections are being seen as a barometer of support for Prime Minister Manmohan Singh’s Congress party ahead of the 2014 national elections. His government has floundered in its second term as economic woes and corruption allegations taint the image of India  as a booming economy.

In Uttar Pradesh, the contest is essentially between chief minister Mayawati’s low-caste Bahujan Samaj Party and Mulayam Singh Yadav’s Samajwadi Party, with the Congress attempting to emerge as a third force.

A large re-election victory for Mayawati could project her regional party onto the national stage. Many of her followers come from the bottom of India’s social order.

She trumpets her efforts to fight discrimination and improve the lives of the poor and marginalised, but her administration also stands accused by critics of rampant corruption and wasting public funds on vast urban landscaping projects.

Rahul Gandhi, whose family has dominated post-independence Indian politics, has led the campaigning for Congress party in the state in a key test of his ability to become a national leader. 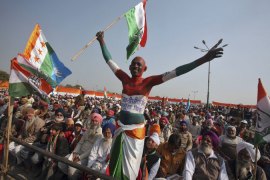 Elections in five states seen as referendum on Congress-led federal government nearly half way into its term. 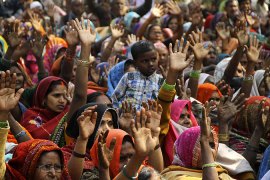 From banal to the bizarre, electioneering has turned legislative polls in five states into a spectacle.