The Syrian military is reportedly moving deeper into residential areas in the city of Homs, a day after the Russian foreign minister said President Bashar al-Assad was “fully committed” to ending the bloodshed.

Activists said the army was firing rockets and mortar rounds to subdue opposition districts on Wednesday, as tanks entered the Inshaat neighbourhood and moved closer to Bab Amr.

Activist Hadi al-Abdallah said that at least 43 people were killed overnight in the central city, and other activists reported even higher death tolls.

“Some areas are completely [besieged]. There is no internet, no landlines or mobile lines,” Al-Abdallah said.

As the shelling of Homs continued for the fifth straight day, Ahmet Davutoglu, the Turkish foreign minister, announced plans for an international meeting to forge a common approach between regional players and world powers to the Syrian crisis.

“The failure of the Security Council to agree on firm collective action appears to have fuelled the Syrian government’s readiness to massacre its own people in an effort to crush dissent.”

Mohammad Hassan, another activist in Homs, said bombardment had intensified in the early morning of Wednesday, targeting Bab Amr, al-Bayada, Khalidiyeh and Wadi al-Arab, all which have revolted against Assad.

“Mortar and rocket fire has subsided, but heavy machineguns and anti-aircraft guns are still strong,” he said. “Tanks are in main thoroughfares in the city and appear poised to push deep into residential areas.”

Repeated efforts by the Arab League and Russia to broker talks have been rejected by the Syrian opposition, which refuses any negotiations while the crackdown continues.

Russia – which government wields unique leverage as a major arms supplier with longstanding political ties to Syria, and a naval facility on its coast – vetoed a UN Security Council on Syria along with China last week.

In the latest diplomatic developments, Gulf Arab states joined the US and several European countries in withdrawing their ambassadors from Damascus on Tuesday. 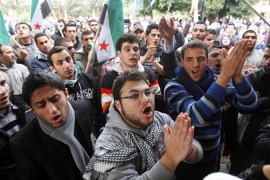 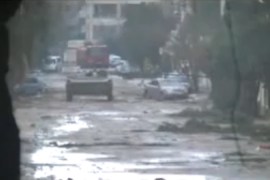