Argentina plans to present a formal complaint in the United Nations over Britain’s “militarisation” of the situation in the Falkland Islands, known as Las Malvinas in Argentina.

“We will present a complaint to the UN Security Council and the UN General Assembly, as this militarisation poses a grave danger to international security,” President Cristina Kirchner told a group of politicians and Argentine veterans of the 1982 Falklands war on Tuesday.

Referring to the British navy’s deployment of a state-of-the-art warship to the region last week, Kirchner said that the UK was “once again in the process of militarising the south Atlantic”.

“We cannot interpret in any other way the deployment of an ultra-modern destroyer accompanying the heir to the throne, who we would prefer to see in civilian attire,” she added, referring to Prince William, second in line to the British throne, who is currently serving as a search-and-rescue helicopter pilot on the islands.

Hundreds of protesters rallied near the government palace where Kirchner was speaking, waving Argentine flags and shouting: “Malvinas! They belong to us!”

On the other hand, UK foreign office officials said on Wednesday that London would not negotiate over sovereignty without the islanders’ consent and said that the UN charter backed the British position.

“The principle of self-determination, as set out in the UN Charter, underlies our position,” a spokeswoman said.

“The people of the Falkland Islands are British out of choice. They are free to determine their own future and there will be no negotiations with Argentina on sovereignty unless the islanders wish it.”

The latest spat comes amid an increasingly bitter diplomatic war of words between Argentina and the UK ahead of the 30th anniversary of the war, which broke out April 2, 1982, when Argentina’s military government sent troops to the islands in an effort to wrest them from British control. Britain has held the islands since 1833.

‘Uniform of a conquistador’

David Cameron, the British prime minister, has accused Buenos Aires of having colonialist ambitions towards an island population that wants to remain under British rule.

London said that HMS Dauntless’ deployment to the Falklands was a routine replacement of another vessel.

The UK maintains a permanent military presence, including “air defence assets, maritime patrol capability and infantry forces”, according to the Ministry of Defence website.

“The Malvinas requires that we take a new look and see Argentina fighting as a whole,” said Federico Pinedo, leader of the right-wing Propuesta Republicana bloc, in a radio interview.

Both countries will soon mark the anniversary of the 74-day war which cost the lives of 649 Argentine and 255 British troops.

The UK retained control and has vowed to defend the islands as long as the inhabitants want to remain a British territory.

But Graham Bound, a journalist and author of a book about the Falklands war, told Al Jazeera that the deployment of British warships to the island was part of a routine process and did not indicate ambitions to engage in conflict.

“I dont think that Britain wants to have another conflict. It’s fully involved in Afghanistan and it’s not the force that it once was,” he said. 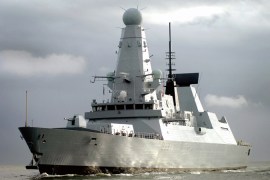 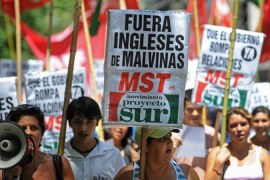 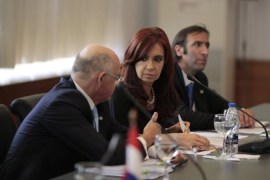