The confrontation between security forces and striking policemen occupying the state legislature in the Brazilian city of Salvador can be resolved through negotiations, according to the governor of Bahia state.

The policemen inside the state legislature, where food and water are running low, are at present surrounded by more than 1,000 soldiers and police.

“We are heading toward a negotiated way out [of the crisis],” Jaques Wagner told Globo News television on Tuesday.

His remarks came as families of the strikers with children emerged from the legislature and other supporters camped out in the gardens overnight.

The strikers, demanding higher pay, better working conditions and an amnesty, have pledged to resist if troops tried to flush them out of the building.

Officials say a third of the state’s 31,000 police have joined the strike.

“We are fighting for our rights. If they want war, they will have war. Our fight is against the government,” Eduardo Nascimento, a 56-year-old military policeman, said.

The state government says it cannot afford the pay raise.

“When you negotiate for so long, it means you are heading in the right direction,” Wagner, the governor, said.

Wagner said he was willing to meet the strikers’ demand for a 17 per cent pay raise but ruled out any amnesty for those strikers who engaged in “criminal acts”.

He said that he did not have the financial means to readjust police salaries immediately, but pledged that the increase would “be granted gradually over the next three years”.

The Bahia state government initially offered a 6.5 per cent pay raise, which was rejected by the strike leader, Marcos Prisco.

Wagner said that over the past five years, salaries of military police, who in Brazil are responsible for maintaining law and order, rose 30 per cent.

The strike, which began six days ago, has led to an increase in crime in the city of 2.7 million people, including at least 93 murders in and around Salvador, where major Carnival celebrations are set to begin in two weeks.

Earlier, Prisco promised “to resist”, warning that “if the army storms the building, there could be a catastrophe”, according to the Globo website G1.

Jose Eduardo Cardoso, Brazil’s justice minister who is leading the federal efforts, said more federal security forces could be sent to Bahia if needed. He said the security situation is still “unstable”.

A contingent of 3,500 army, navy and federal police took control of security in the state on Saturday. 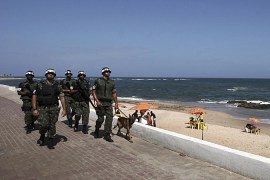