The Brazilian government has sent federal troops to the state of Bahia to restore order after a labour strike by police opened the door to a crime wave, authorities said.

By Saturday, the homicide rate in the state capital of Salvador was up 117 per cent to 50 killings in four days since the strike started, according to figures from the government news service Agencia Brasil.

Thirty of those killings reportedly took place within 24 hours. A jump in lootings and assaults was also reported.

“Police reject claims they should be held responsible for any violence … and the government believes a hard core group of union leaders are fanning the flames of the violence,” said Al Jazeera’s Gabriel Elizondo, reporting from Salvador.

A judge has ruled the strike is illegal and 12 arrest warrants have been issued for union leaders, but police rallied in a show of defiance on Saturday by taking over the legislative assembly.

“Neither the police on strike nor the government are willing to back down,” our correspondent said.

“A group of police using reprehensible methods, spreading fear among the population, caused disturbances in some parts of the state,” said Wagner.

At the governor’s request, President Dilma Rousseff sent a reported 2,000 Brazilian army soldiers and a contingent of 650 elite federal police troops to the nation’s third-largest city.

On Saturday, troops were seen patrolling the streets of Salvador, which is preparing to welcome millions of tourists for the annual Carnival festival.

Nevertheless, the climate of insecurity created by the strike resulted in 10 per cent of air and hotel reservations being canceled, Pedro Galvao, president of the Association of Travel Agencies of Bahia, told Brazil’s O Globo newspaper.

State officials have said that about 10,000 of the state’s 30,000 police are on strike, demanding a 50 per cent increase in wages and better bonuses.

The average wage for a military police officer is about $867 per month. 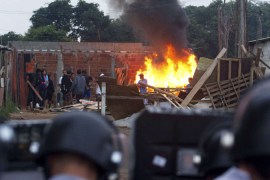 Police invaded a slum in the south of the country, knocking down houses and forcing many from their homes. 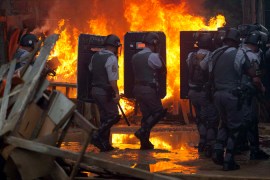 Landless families who were evicted after losing legal battle with owner fight police with sticks and clubs. 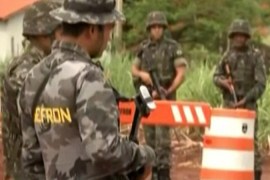 Some neighbours are critical of the large-scale operation aimed at tackling illegal trafficking.