Thousands of Russians have joined hands to form a ring around Moscow city centre in protest against Vladimir Putin’s expected return as president in an election next week.

Protesters stood in a long line on Sunday, around the 16-km Moscow Garden Ring Road, wearing white ribbons that symbolise the biggest opposition protests since Putin rose to power 12 years ago.

Putin is all but certain to win the presidential election on March 4, but the growing protests have highlighted demands for greater democracy and openness from mainly urban voters fed up with widespread corruption and one-man rule.

“I don’t know that there will be any result [from the protest] but I’ve come to show the government that there are
many of us and that there are many people together,” Nikolai Chekalin, a 66-year-old scientist, said.

“I would like transparency, an honest court and conditions for business to develop.”

The mood was festive as the people forming the ring, many of them dressed in white scarves, waved at cars passing by. Many cars hooted in support and some of the protesters chanted: “Russia without Putin”.

Some protesters held blown-up condoms; Putin mocked the protesters late last year by saying he had mistaken the white ribbons pinned to their coats for contraceptives.

“Both the pro-Putin and the opposition rallies were good-natured and held amid a large police presence.

“Most of the opposition protesters say they know Putin will win the election but that it’s important that they show their presence ahead of the vote.”

Opposition activists estimated that they needed 34,000 people for Sunday’s protest to complete the chain along the Garden Ring, and they appeared to have succeeded.

The mass anti-government protests began in Russia after allegations of fraud in a parliamentary election won by
Putin’s United Russia party on December 4.

The Kremlin has offered to consider some electoral reforms but not met any of the protesters’ main demands, including a rerun of the election.

Putin is all but certain to win the presidential election on March 4 but the growing protests have highlighted demands for greater democracy and openness from mainly urban voters fed up with widespread corruption and one-man rule. 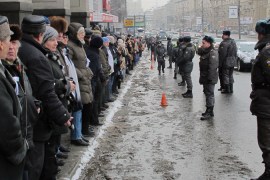 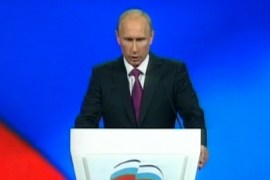 Putin leans on ‘less modernised’ base 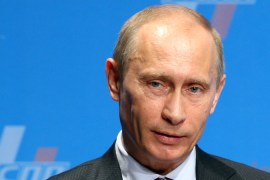 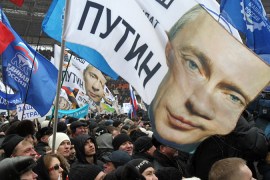 Inside Story asks if victory for the Russian prime minister in upcoming presidential election is a foregone conclusion.