A Dutch prince hit by an avalanche while skiing off-trail in Austria last week suffered massive brain damage and may never regain consciousness, his doctors have said.

Johan Friso was buried for 25 minutes before rescuers found him. It then took nearly 50 minutes to resuscitate the prince after he was pulled from the snow. The elapsed time may have caused permanent brain damage, according to Dr Wolfgang Koller, head of trauma at Innsbruck hospital in western Austria.

“Because the prince was stuck under the snow for a very long time, he did not get enough oxygen,” Koller said on Friday. “The lack of oxygen led to a cardiac arrest, which lasted for 50 minutes

“At the moment, it cannot be predicted if he will ever regain consciousness.”

Koller said if the 43-year-old wakes from the coma, his “rehabilitation will take months, possibly years”.

Friso was skiing off-trail in Lech on February 17, despite avalanche warnings, with a childhood friend from the alpine village the Dutch royal family has been visiting each winter for years.

The friend was carrying an avalanche “air bag” vest, designed to “float” the person wearing it towards the top of the avalanche debris, and escaped without serious injury. Friso was found with the help of a signalling device he was carrying and flown by helicopter to the Innsbruck clinic.

Members of his family, including Queen Beatrix, Friso’s wife Princess Mabel, and his older brother Crown Prince Willem-Alexander, have travelled to and from the hospital.

The royal family appealed on Friday for the media to respect their privacy. In a statement, the family said it “needs space to learn how to deal with Prince Friso’s health situation and to adjust their lives to it”.

Friso, who worked for years as an investment banker for Goldman Sachs, had previously been a relatively low-profile member of the highly popular Dutch royal family.

The most public period of his life before the accident came during his engagement to Mabel, whose maiden name was Wisse Smit. During her vetting to join the royal house, the pair decided not to disclose the full extent of a university friendship she had with drug baron Klaas Bruinsma, who was later slain in a gangland killing.

But as details of their former friendship emerged in the Dutch press, then-prime minister Jan Peter Balkenende said he would not propose the law needed for parliament to approve Wisse Smit’s entry to the royal house. According to the Dutch constitution, all royals require a law to be passed approving their marriages.

Friso and Mabel decided to marry without seeking parliamentary approval, knowing the decision meant Friso would be cut from the royal house and line of succession. They are still members of the royal family, and bear honorific titles of Prince and Princess of Oranje-Nassau.

The couple live in London with their two daughters, Luana, 6, and 5-year-old Zaria. 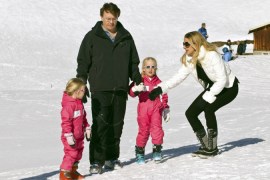 Prince Johan Friso in critical but stable condition after being buried by avalanche while backcountry skiing in Austria.