A Palestinian detained by Israel, Khader Adnan, has agreed to end his 66-day hunger strike as part of a deal under which he will be released without charge, sources tell Al Jazeera.

Al Jazeera’s Nisreen El-Shamayleh, reporting from Adnan’s hometown of Jenin in the occupied West Bank, quoted officials as saying on Tuesday that “Adnan has informed his lawyers that he has suspended his hunger strike and agreed to the offer to serve his sentence until April 17”.

A spokesperson for the Israeli Supreme Court earlier told Al Jazeera that based on the deal reached between Adnan’s lawyers and the Israeli justice ministry, he would end his fast in return for the court’s decision to “erase” his file and release him on April 17, ending his “administrative detention”.

Israel’s supreme court had been expected to hear an urgent appeal by Adnan’s lawyer later on Tuesday, but the hearing was cancelled after news of the deal became public.

“This man had no charges until now, no interrogation came up with any conclusions, no evidence against him. This is the truth, this is the reality,” Jawad Bulus, one of Adnan’s lawyers, told Al Jazeera.

“After three weeks of severe interrogation they shifted him as administrative detainee, where no charges could be faced. The only phrase that came out of them is that this man is a prominent activist in the Islamic Jihad of Palestine, which can be said against anybody in the world.”

Adnan has become a potent symbol of protest against Israel’s practice of holding suspects without trial.

Israel arrested Adnan, a baker by profession, on December 17 near the northern West Bank town of Jenin.

Israel accuses him of being a spokesman for the Palestinian group, Islamic Jihad.

Adnan’s protest has seen him break the record for the longest hunger strike by a Palestinian prisoner, with the previous record set in 1976 when a group of prisoners refused food for 45 days.

Speaking to the AFP news agency on Monday, his wife described him as a determined man with very strong principles who would “stick to his message, even if he has to sacrifice his life”.

Adnan is one of some 5,000 Palestinian prisoners being held in Israeli jails, and one of more than 300 currently being held in administrative detention.

His case sparked expressions of concern from the EU and the UN, and has gained widespread support among Palestinians. 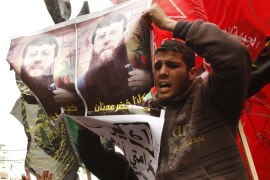 Khader Adnan: No food without freedom

Friday was the 62nd day of the Palestinian prisoner’s protest against his detention by Israel. 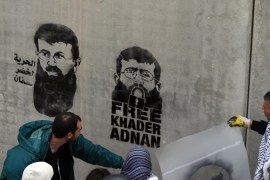 Randa Adnan: ‘I still have hope’

The wife of Khader Adnan speaks out over the detention that forced him to lapse into an increasingly dire hunger strike. 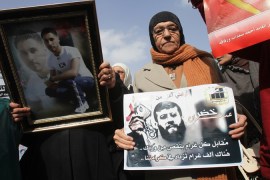 Starving for freedom: The hunger strike of Khader Adnan

Khader Adnan, currently on hunger strike in an Israeli prison, runs the risk of dying without international help.