A 29-year old Moroccan man who thought he was carrying explosives for an attack has been arrested in the US capital as part of an anti-terrorism investigation, according to the Federal Bureau of Investigation.

The FBI said in a statement on Friday that Amine el-Khalifi was arrested “in connection with a terrorism investigation”.

“Explosives the suspect allegedly sought to use in connection with the plot had been rendered inoperable by law enforcement and posed no threat to the public,” the statement said.

Khalifi arrived near the Capitol building in a van with two undercover operatives and walked toward the building, according to court papers. He was arrested before he left the parking garage.

Dean Boyd, a US justice department spokesman, said the arrest capped an undercover operation in which the suspect had been closely monitored by law-enforcement authorities.

FBI agents posing as al-Qaeda members had provided Khalifi with the fake explosives that they claim he intended to set off at the Capitol.

Khalifi made a brief appearance in a federal court in Virginia on Friday afternoon, wearing a green shirt and black pants and holding his arms together behind his back.

A judge set a bail hearing for Wednesday.

A criminal complaint charges him with knowingly and unlawfully attempting to use a weapon of mass destruction against property that is owned and used by the United States. The charge carries a maximum penalty of life in prison.

No address for the suspect was listed in court papers, but FBI agents in blue jackets raided a home in Virginia after the arrest. A police car blocked the entrance.

Khalifi expressed an interest in killing at least 30 people and had considered several other targets, including a synagogue, before settling on the Capitol, a counterterrorism official told the Associated Press.

He had come to the United States as a 16 year old and is not currently believed to be associated with al-Qaeda. He did, however, believe that he was working with al-Qaeda operatives in the current plot, an affidavit submitted to the court said.

According to the affidavit, filed by an FBI agent, Khalifi told acquaintances in January 2011 that he thought that the “war on terrorism” was a “war on Muslims” and that they needed to be ready for war.

Later, when he had decided on the US Capitol as his target, Khalifi asked his associates for more explosives, to be detonated remotely via a cellphone.

In January, he unknowingly told authorities that he wanted to know how big an explosion would be required to destroy an entire building.

Khalifi met with an undercover law enforcement officer, who gave him an automatic weapon, which had been rendered inoperable. El Khalifi carried the firearm around the room, practiced pulling the trigger and looking at himself in the mirror, the affidavit says.

Danny Schechter, an independent journalist and filmmaker, told Al Jazeera the case against Khalifi is a classic case of FBI entrapment.

“It seems to be right out of the FBI playbook. It is almost identical to a number of prior arrests, where the FBI finds some vulnerable young man … They then basically encourage him to get involved in a campaign to be recruited, in this case by some sort of al-Qaeda creation, which really isn’t al-Qaeda. And then arm him weapons and then arrest him.

“We’ve seen things along these lines for years now, of entrapment as a technique supposedly for investigative purposes, but actually for prosecutorial purposes.”

The investigation into Khalifi had been ongoing for more than a year, the counterterrorism official and another government official told AP. The official spoke on condition of anonymity as the investigation is continuing.

Sergeant Kimberly Schneider, a spokeswoman for the US Capitol Police, said in a statement: “At no time was the public or congressional community in any danger.”

There have been a number of undercover operations in the Washington DC area in recent years in which suspects thought they were plotting to carry out terrorism attacks, but in reality were being monitored by FBI agents. 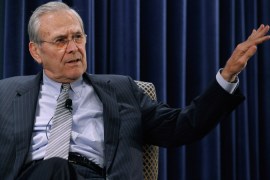 Donald Rumsfeld, the former US secretary of defence, speaks to Sir David Frost. 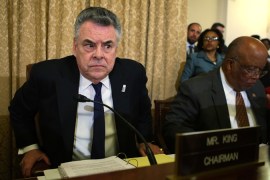 In recent years, the threat of terrorism by Muslim Americans has been exaggerated by US officials, a new study shows. 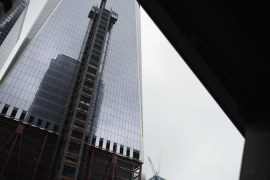 Read the full transcript below.