Two Iranians have been arrested and charged with plotting a bomb attack in Bangkok, according to Thailand’s foreign minister.

Thai officials said on Wednesday they believed the incident in the Thai capital could be linked to recent attacks on Israeli diplomats in India and Georgia.

A man carrying an Iranian passport lost his legs and injured four other people in a Bangkok neighbourhood on Tuesday when grenades he was carrying apparently exploded by accident, police said.

Referring to the Iranians arrested in connection with the incident, Surapong Tovichakchaikul, the Thai foreign minister, said: “They are charged with causing an illegal explosion in a public area and attempting to kill police officers and members of the public.

“We cannot say yet if it’s a terrorist act, but it’s similar to the assassination attempt against a diplomat in India.”

The injured suspect, identified as Saeid Moradi, was in stable condition in a Bangkok hospital, although he remained unconscious after 10 hours of surgery, Suparung Preechayuth, a hospital surgeon, said.

Police said he had been charged with illegal possesion of explosives, causing explosions, attempted murder and assaulting a police officer. Two other men shared the rented house with him.

One person was arrested at Bangkok’s international airport on Tuesday but he has not yet been charged.

Another person was arrested on Wednesday afternoon at Kuala Lumpur airport in neighbouring Malaysia as he tried to board a flight to Tehran, Malaysian police said.

The suspect, in his 30s, had apparently evaded authorities at Bangkok airport and flown to Malaysia.

Police Inspector-General Ismail Omar said he was arrested on intelligence from Thai authorities and was being investigated for “terrorism activities” related to the Bangkok bombings.

Asked whether the explosives used in India and Thailand were the same, a senior Thai security official said they both had the same “magnetic sheets”.

“The individual was in possession of the same magnets and we are currently examining the source of the magnet,” Wichian Podphosri, the secretary of Thailand’s National Security Council, said.

In the Bangkok attack, one explosive device went off in the bomber’s home. Another was thrown at a taxi that would not take one of the men who left the house following the explosion.

Reacting to the latest developments, Binyamin Netanyahu, the Israeli prime minister, accused Iran of targeting diplomats, saying that if the world did not stop Iran’s “aggression”, the attacks would spread.

Police in Georgia said they had thwarted on an Israeli diplomatic vehicle on the same day. 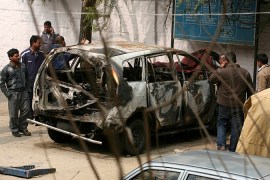 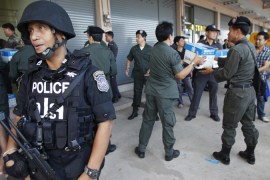