The Bahraini government’s promised reforms have meant little so far for Taha al-Derazi, one of the country’s leading neurosurgeons, who has spent the last nine months wondering if he’ll ever be allowed to return to work.

Al-Derazi was suspended from his job in May, allegedly because of his political activism last year, though he says he never attended any protests while he was on duty. He was one of countless medical workers targeted by security forces, though he managed to avoid being arrested, unlike dozens of his colleagues. “They [the police] say it’s because they saw our pictures in the demonstrations in Pearl Roundabout,” he said.

Now he is forbidden to even visit colleagues at Salmaniya Medical Complex, the main hospital in Bahrain.

“At our hospital we have only two neurosurgeons, and both of us are suspended, so it has become very difficult for the patients,” Al-Derazi said. “They don’t know where to go.”

Al-Derazi is one of more than 4,000 Bahraini workers who were suspended or sacked for political reasons last year. The independent government commission which studied last year’s unrest concluded that the sackings violated Bahraini law, and that Shia employees were often singled out for termination because of their sect.

Bahrain’s labour ministry says, according to official statistics released earlier this month, that all but 179 of the dismissed workers have now returned to their jobs.

“The remaining workers should be reinstated as soon as possible, without any prejudice or conditions and as stated in their original contracts,” Jameel Humaidan, the country’s labour minister, said at a press conference on Saturday.

Hundreds of dismissed workers have indeed gone back to their jobs. Jalil al-Mulla, a senior logistics manager at Gulf Air, returned to work last week after nearly 10 months of unemployment, though he doesn’t think the labour ministry deserves much credit for his reinstatement.

But Bahraini labour unions and independent analysts say the government used some creative statistics, and a very liberal definition of the word “reinstated”, to conclude that only 179 sacked workers were still jobless.

“They consider it to mean anyone who was already contacted [by their company], or called to appear before management,” said Karim Radhi, an official with the General Federation of Bahrain Trade Unions. “We don’t consider them as reinstated until they actually go back to work.”

Indeed, a closer reading of the government figures reveals that less than half of the 2,462 dismissed workers have actually returned to their jobs. And those figures only cover the private sector; an estimated 850 public sector workers are also still unemployed.

The issue of the dismissed workers is a good microcosm of the larger impasse over reforms in Bahrain. The government has taken a few modest steps, like a slate of proposed constitutional changes announced last month, and has created an elaborate public-relations apparatus to publicise those steps. 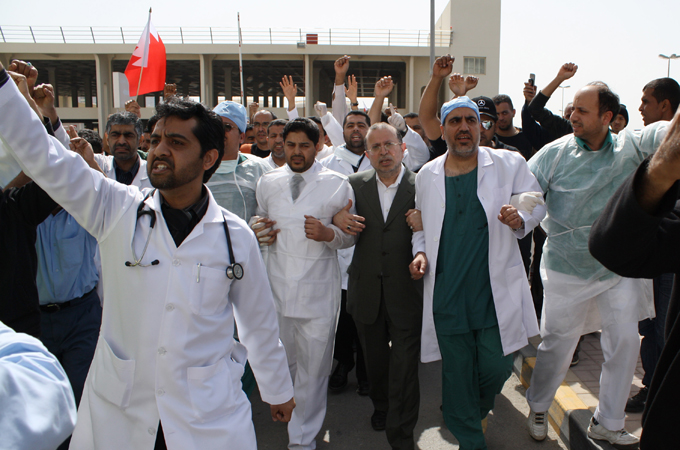 Dozens of medical workers were targeted last year, and not all of them have returned to their jobs yet [EPA]

But on a range of issues, from dismissed workers to security and human rights, analysts say the government’s reforms have been mostly cosmetic.

“They’ve been quite energetic in trying to appear to do something without actually making any changes,” said Kristian Ulrichsen, a professor at the London School of Economics who has written extensively on Bahrain. “Any meaningful discussion really isn’t on the table.”

The most obvious gap between rhetoric and reality is reforming the notorious security services.

King Hamad bin Isa Al Khalifa quickly announced a few changes. He enlisted the help of John Timoney, a former police chief in the United States, and John Yates, a former assistant commissioner with the Metropolitan Police in the United Kingdom. And he issued a royal decree barring the National Security Agency, responsible for dozens of unlawful detentions last year, from carrying out arrests.

Yet residents of many Bahraini villages say the abuses have continued. Police continue to raid homes in the dead of night; one unit last week even fired a tear gas canister into the house of Ali Salman, the leader of Al Wefaq.

Two people have died under mysterious circumstances in police custody over the past month. Opposition activists say they were tortured.

The government blamed one of the deaths on “complications from sickle cell anemia,” a cause of death it also cited three times last year. The BICI report concluded that at least two of those detainees were actually tortured to death.

“The use of tear-gassing has, if anything, intensified,” said Ulrichsen. “This is the problem: The reformist elements of the family, they can’t dislodge the hardline elements… so the changes have been cosmetic.”

Those “hardline elements” are personified by the prime minister, Khalifa bin Salman Al Khalifa, who is thought to favour a tougher stance against protesters than either the king or the crown prince.

He also controls the security services. So despite the king’s pledge to integrate the police by recruiting more Shia officers, rather than importing former soldiers from countries like Pakistan and Yemen, few Bahrainis expect to see significant changes. One politician dismissed the king’s promise as “a joke.”

“The quality of the security forces handling this issue is frankly appalling… they do not speak the language, they have very little in the way of crowd control training,” said Michael Stephens, a researcher at the Royal United Services Institute in Qatar. “But there’s little appetite for further reform.”

‘It’s what they don’t tell you’

The BICI report also highlighted the demolition of dozens of mosques and other religious structures. The government argues that most of them were built illegally, since more than half did not have building permits. But the decision to target only Shia places of worship reinforced the sense of discrimination which has helped to fuel the protests.

The government announced last month that it was rebuilding a dozen of the demolished mosques.

The slow pace of reform is helping to deepen a split within the opposition. Members of Al Wefaq openly acknowledge in interviews that they are losing control of “the street”, the youth protesters who are using increasingly aggressive tactics against the security forces.

“People are losing hope in the king,” said Matar Matar, a former member of parliament from Al Wefaq. “If we continue to talk about negotiations with this regime, nobody will have any hope.”