Security forces in Bahrain have fired tear gas at protesters attempting to march to the landmark Pearl roundabout in the capital, Manama, on the one-year anniversary of the beginning of anti-government demonstrations at the site.

Activists reported on Tuesday that security forces had used stun grenades and shotguns to scatter hundreds of protesters attempting to occupy the roundabout which became the epicentre of weeks of protests last year by the Gulf island’s Shia majority against the ruling Sunni dynasty.

Protesters marched from Sanabis, Deih and Jidhafs, which lie a few kilometres to the west of Manama, despite police warnings that protests would be dispersed, witnesses said.

“Down with (King) Hamad!” they chanted.

The Coalition of the Youth of February 14th Revolution, a group that operates separate from the main Shia bloc led by Al-Wefaq, declared on Tuesday that they planned to return to the central roundabout.

“All of us are returning”, read a call for protest posted on its Facebook page, designating 6:40am local time (0340 GMT) as the starting time.

Bahrain News Agency quoted interior ministry’s appeal that cautioned against what it called “dubious TV channels that may attempt to mislead the public”.

Tuesday’s confrontations came just hours after clashes on Monday might between security forces and protesters.

Thousands of opposition supporters marched through Manama’s streets in the largest protest against the government in months.

Abdulaziz bin Mubarak Al Khalifa, a senior official with the Bahrain Information Affairs Authority, told Al Jazeera: “It’s very unfortunate that a very radical element of one of the opposition sects has decided once again to take to the streets calling for reforms.”

“Let’s not forget there have been many opportunities for dialogue starting with Royal Highness crown prince asking for dialogue a year ago, and their policy has been to reject all these attempts,” he said.

“So, we do see some pockets of violence but they are not of the scale that we imagined it to be. We hope people focus their energy in more positive way.

“People have been throwing Molotov cocktail and attacking the security forces on the ground and actually imposing themselves on the majority population of Bahrain.”

Security forces have taken positions around the roundabout and also across the Gulf island nation to prevent the opposition from staging a mass rally.

But some activists were undeterred by the authorities’ warnings of zero tolerance for anti-government activities in the strategic island that is the home of the US Navy’s 5th Fleet.

“We will not back down,” said Nader Abdulimam, who had taken refuge in a house just outside of Manama.

The government imposed martial law last March and called in Saudi-led GCC troops, which crushed the protests. The authorities then razed the landmark edifice at Pearl roundabout to the ground.

The now heavily guarded square holds great symbolic value for Bahrain’s opposition movement, and protesters have repeatedly tried to re-occupy it. But authorities have effectively locked off the capital to demonstrations since then.

Martial rule was lifted in June, but street battles between security forces and protesters still flare up almost every day in the predominantly Shia villages around the capital.

More than 40 people have been killed since the Shia uprising began.

Bahrain’s Sunni rulers have promised reforms, although they have fallen short of the demands made by the main Shia group, Al Wefaq. These include ending the monarchy’s ability to select the government and set key state policies.

She also called for security forces to “exercise restraint and operate within the rule of law and international judicial standards”. 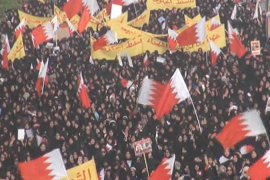 Hundreds of Shia workers, who lost their jobs, still waiting to be reinstated despite government’s repeated promises. 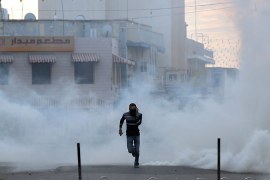 Suppressing the narrative in Bahrain

As the anniversary of the uprising nears, the country’s rulers are denying foreigners entry and hiring PR firms. 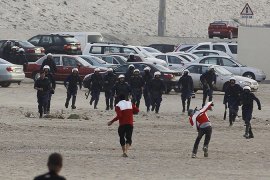 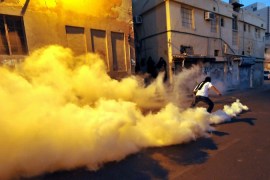 The government has taken few steps to implement the recommendations of an independent inquiry into last year’s unrest.