The Arab League has called on the UN Security Council to create a joint peacekeeping force for Syria and has urged Arab states to sever all diplomatic contact with President Bashar al-Assad’s government.

Syria immediately rejected the moves, spelled out in a resolution adopted on Sunday by the league’s foreign ministers meeting in Cairo.

Saudi Foreign Minister Saud Al-Faisal conveyed the 22-nation league’s deep frustration with Syria, telling delegates that it was no longer appropriate to stand by and watch the bloodshed.

But Nabil el-Arabi, the league’s chairman, said he had received a message from Russian Foreign Minister Sergei Lavrov that expressed support for the league’s efforts and an expanded “observer” mission. Lavrov earlier defended Russia’s veto and subsequently visited with Assad in Damascus.

Arab foreign ministers have been engaging in “intensive talks” with Russia and China and are hoping they can help encourage Assad to accept a peacekeeping force as an alternative to escalating conflict, Rageh said.

The league also agreed to step up economic sanctions and provide the Syrian opposition with political and financial support, though it again refrained from recognising the Syrian National Council – the most prominent of anti-Assad groups.

Tunisia will host a “Friends of Syria” meeting on February 24 to attempt to build an international consensus on how to end the violence. Tunisia’s foreign minister said the meeting will include Arab, regional and international states, and Qatari Prime Minister Hamad bin Jassim Al Thani, who is also the country’s foreign minister, said he backed the proposal.

Syrian forces continued their bombardment of the city of Homs, and activist groups said 67 people people were killed during violence across the country on Saturday, including 14 defectors from the Syrian military.

Opposition neighbourhoods in Homs were hit by tank and rocket bombardments in the government’s continuing crackdown on protesters there, with the city’s Bab Amr area coming under concentrated fire.

The Syrian Observatory for Human Rights (SOHR), an UK-based activist group, reported that 10 soldiers were killed in an ambush by army defectors on Friday in the Idlib area, near the Turkish border.

Army defectors also fought government troops for hours overnight in the al-Qaboun neighbourhood of Damascus. State media reported that anti-government forces had also killed a senior Syrian military doctor outside his home in the capital.

The SANA news agency reported that “an armed terrorist group” had killed Brigadier-General Issa al-Khouli, described as a doctor and hospital director, in the Rukneddine district on Saturday. 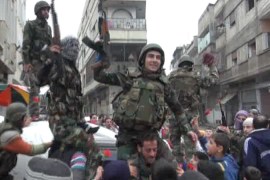 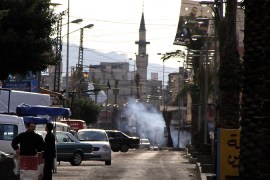