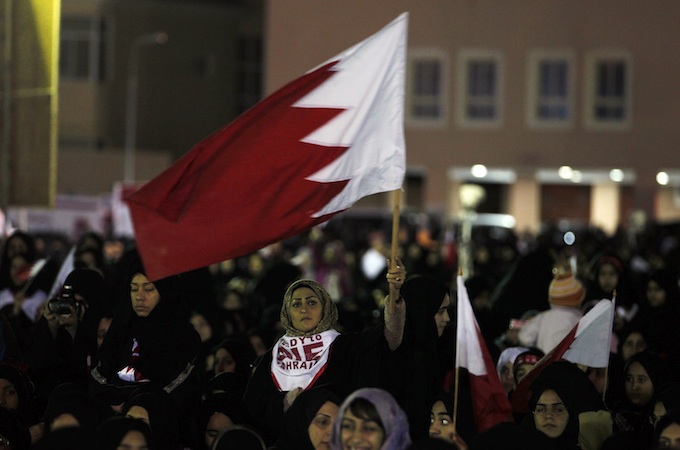 Police used force to break up an anti-government march in the Bahraini capital, using tear gas and stun grenades to disperse hundreds of peaceful protesters.

Around 200 people gathered on Saturday at the Standard Chartered bank near Bahrain’s diplomatic district and set off toward Pearl Roundabout, the centre of last year’s uprising. Many chanted “to the roundabout” as they marched, but they were quickly met by riot police, who warned them the rally was unauthorised.

“We gathered in Manama, and we went out and the riot police came, and [they] told us this was an illegal gathering,” said one activist. “Then they stopped talking and shot us with tear gas.”

It is unclear whether anyone was injured. Witnesses said at least one protester was detained and driven away in a police van. The march was organised by Nabeel Rajab, the head of the Bahrain Centre for Human Rights.

Tensions in Bahrain have been rising ahead of Tuesday’s one-year anniversary of the first large-scale protests in the island kingdom.

Last year’s uprising was brutally crushed in March, when security forces cleared Pearl Roundabout, and troops from Saudi Arabia, Qatar and other Gulf countries were deployed to Bahrain.

Scattered protests have continued, most of them confined to the predominantly Shia villages outside the capital. Security forces used tear gas to break up several of these protests on Friday night.

Soldiers and police also conducted early-morning raids in more than a half-dozen villages on Saturday, according to activists. An unknown number of people were arrested.

Police reportedly fired tear gas canisters into the home of Ali Salman, the leader of the opposition Al-Wefaq party, whose house was also targeted by police in August.

Police have blocked off many of the major roads leading into the capital, as well as the entrances to restive villages.

“[The protest on Saturday] wasn’t more than a few hundred people, because many people had a hard time reaching the meeting point,” another activist said. “The roads leading into the centre of Manama were all blocked by police.”

Al Jazeera is one of many international news organisations that was not allowed to enter the country to cover the anniversary. Details of Saturday’s rally were confirmed through activists and human rights organisations inside Bahrain.

Police also arrested two members of a human rights group called Witness Bahrain, which sent observers to monitor what is expected to be a series of protests ahead of February 14, the date of the one-year anniversary.

The two observers, Huwaida Arraf and Radhika Sainath, both US citizens, will likely be deported from the country, according to other activists and government officials. Witnesses said Arraf was surrounded by a large group of riot police and then dragged to a nearby police car.

Mohamed al-Jishi, the lawyer representing the two women, said that he went to the police station in Manama but was not allowed to see them.

“The police took a statement, but they [the observers] refused to sign it because there was nobody who could translate,” he said.

Protests have increased over the last few weeks and become more violent. Youths have attacked police with petrol bombs and blocked roads with burning tyres.

Two people have died while in police custody over the last few weeks. Activists say they were tortured.

The government blames one of the deaths, that of 19-year-old Mohamed Yaaqub, on “complications from sickle cell anemia”.

It cited the same cause three times last year, but the independent government commission that released its report last year found that at least two of those detainees were actually tortured to death.

Bahrain’s increasingly fractious opposition has a range of demands. The formal opposition parties want limited constitutional and political changes, while more hard-line protesters call for the overthrow of the Khalifa monarchy, the Sunni family which has ruled Bahrain for more than 200 years.

The government has implemented a few limited reforms over the past few months, such as giving the parliament more power to dismiss ministers. Yet analysts say it has done little to stop abuses by the security forces, or to implement significant political or economic change.