Mario Monti, the Italian prime minister, has announced he intends to resign once next year’s budget is approved, saying he can no longer govern after Silvio Berlusconi’s party withdrew its parliamentary support for his technocrat government.

Just hours earlier on Saturday, Berlusconi, who was forced to resign as prime minister last year amid a sex scandal and a debt crisis, said he would run for office again next year.

Berlusconi said his party, the People of Freedom (PDL), would stand on a platform that would attack Monti’s stewardship of the economy.

PDL withdrew its support for the government on Thursday.

Monti, an economist, became prime minister in November 2011, heading an unelected government of technocrats and introducing a policy of tax rises and austerity measures to get the economy under control.

Monti’s decision to step down paves the way for early elections a year after he helped pull the country back from the brink of financial disaster.

A statement from the office of Giorgio Napolitano, Italy’s president, said that Monti “does not think it possible to continue his mandate and consequently made clear his intention to present his resignation”.

On Sunday Napolitano was watching how financial markets would react to Monti’s decision.

After being asked if he was worried, Napolitano said: “We’ll see what the markets will do.”

If the law for next year’s budget can be passed “quickly”, Monti would immediately confirm his resignation, the statement said.

Monti’s government had in any case been due to step down in spring next year.

A general election had been expected in March or April, though the precise date has not been set.

The Italian parliament is poised to pass the budget by Christmas, and Monti’s resignation probably brings the expected vote forward to February.

Italian “progressives” from the centre-left’s Democratic Party (PD) to the Union of the Centre (UDC) “identify with the reasonable and responsible policies Monti has made”, Pier Ferdinando Casini, UDC leader, said on Sunday.

“A large part of civil society does not want to return to the populism and demagoguery of the past. We must give them the political offering they seek.”

The PD leads the PDL by at least 16 percentage points, according to polls from last week.

Berlusconi ended weeks of speculation by announcing he would run again for the job of prime minister.

In October, Berlusconi, Italy’s biggest media magnate, said he would not run again for the premiership.

On Wednesday evening, however, he said he had been bombarded by requests to return to the field as soon as possible.

Monti’s announcement itself will also increase speculation that he could be eyeing a run as a candidate in the election.

Monti, widely credited with restoring Italy’s international credibility after the Berlusconi era, appeared to take aim at Berlusconi, warning against “populism” as he spoke at a conference in Italy.

He said Italy should not go back to where it was when he took over for Berlusconi a year ago. 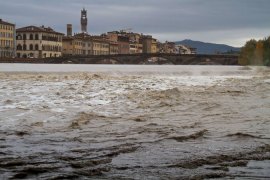 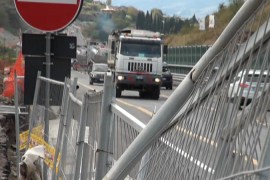 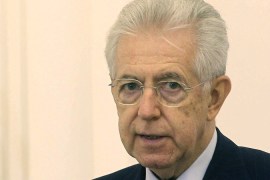