Khaled Meshaal, the Hamas leader in exile, has rejected any concessions over a future Palestine state at a rally marking the 25th anniversary of the armed Palestinian group.

More than 100,000 Palestinians gathered in the Gaza Strip on Saturday to hear him speak for the first time in the Palestinian enclave.

“Palestine is our land and nation from the [Mediterranean] sea to the [Jordan] river, from north to south, and we cannot cede an inch or any part of it,” he said.

“We fight Zionists, not Jews. We fight whoever occupied our land, regardless of religion … Statehood will be the fruit of resistance, not negotiations,” Meshaal told cheering fans.

He said the group looked towards the Palestinian Liberation Organisation (PLO) as a symbol of Palestinian unity and a “reference” for all Palestinian people.

Hamas does not belong to the PLO, but Meshaal said a year ago that it and other factions were “on the path to joining” it.

“We are a single authority, a single reference, and our reference is the PLO, which we want united,” Meshaal said.

His remarks can be seen as the latest bid by the group to integrate with the PLO and consolidate Palestinian ranks.

Israel responded by urging Fatah, which controls the occupied West Bank, to reconsider any reconciliation with Hamas.

“That sort of extremism won’t help peace, the opposite is true. And I would ask the Palestinian president, Mr [Mahmoud] Abbas, if you see Hamas as a political partner, what does that say about your dedication to peace?”

Meshaal, 56, was moved to tears on Friday by the reception he received from flag-waving crowds as he toured Gaza, which is home to 1.7 million Palestinians, after crossing over from Egypt.

Meshaal arrived at the main stage on Saturday in the Al-Qitaba complex, west of Gaza City, accompanied by his deputy, Mussa Abu Marzouk, and Ismail Haniya, the Hamas prime minister.

The venue had been transformed into a sea of green Hamas flags.

“We used only 10 per cent of our capacity in the fighting,” a masked spokesman for Hamas military wing, the Ezzedine al-Qassam Brigades, told the crowd at the Al-Qitaba complex.

“If you had escalated [your attacks], so would we have,” the spokesperson said addressing Israel.

“We will cut the hand that extends in aggression against our people and leaders.”

Hamas security forces were out in strength in the area where Meshaal spoke, closing off nearby roads from the early hours.

Two large empty chairs were placed on the main stage to commemorate Sheikh Ahmed Yassin, the Hamas founder who was assassinated by Israel in 2004, and Ahmad Jabari, a Hamas military commander killed by Israel on November 14 this year.

Between the chairs was placed a model of an M75 rocket of the sort fired at Israeli cities during last month’s conflict that began with Jabari’s assassination.

The backdrop was a model of Jerusalem’s Al Aqsa mosque, which appears on the Hamas symbol. 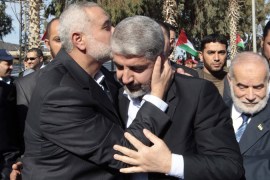 On first-ever visit to the Gaza Strip, Khaled Meshaal says he hopes to become “a martyr” in the besieged territory. 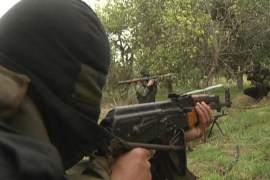 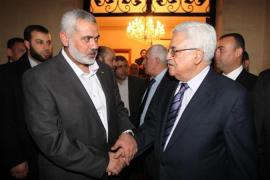 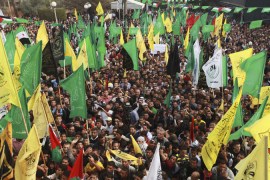