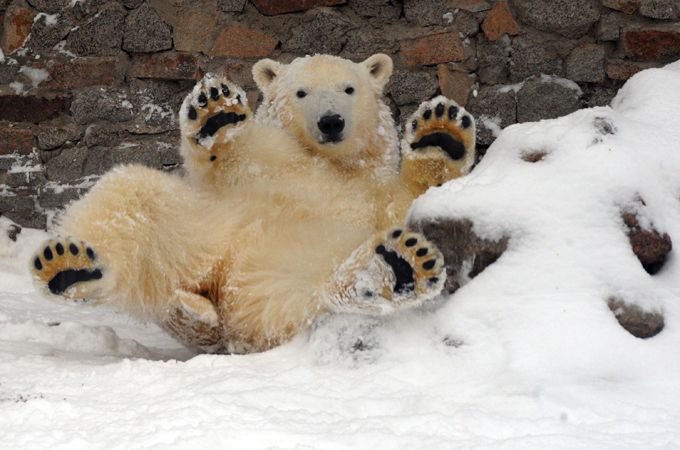 Bearing up nicely. A young polar bear feeling very much at home at the snow covered public zoo in St Petersburg. [AFP]

While Typhoon Bopha  continues to batter the Philippines, we have stormy weather of a wintry nature causing disruption across parts of Western Europe. Several cities have been affected, with Amsterdam amongst the worst affected.

Dozens of flights into Paris, Munich, Geneva and Stockholm were cancelled on Friday. The Dutch carrier, KLM offered alternative travel by road on some of their short-haul services into Belgium, Luxembourg, Germany and Paris as the delays increased.

Roads near the city of Mainz in Germany were in near complete white-out conditions on Friday afternoon. According to the German Meteorological Service, a further 10 to 15cm of snow is expected on Saturday. Temperatures could dip as low as minus 16C in rural spots in the north and east over the next few nights.

Meanwhile, heavy snow also caused problems across a large swathe of eastern France on Friday with up to 10cm being recorded here. Severe weather warnings were issued in 20 counties as traffic ground to a halt on several major roads.
Further outbreaks of snow are expected through the weekend but it is not likely to be as heavy. Overnight temperatures look set to remain well below freezing.

Further east, a new round of heavy snow hit Russia’s second city of St Petersburg and its neighbouring areas early on Friday morning and looks set to continue right through the weekend.  In the nearby Pskov Oblast, the heavy snow resulted in over 48 hours of power outages for 12,000 local residents.

More major snowfalls are expected further south over the next few days. The heaviest snow looks likely to be across the Balkans into southeastern Europe. We could see as much 100cm of snow over parts of the Dinaric Alps, across the Great Hungarian Plain to Carpathian Mountains by the end of the weekend.