Egyptian President Mohamed Morsi has defied calls to curb his sweeping powers and refused to call off a referendum on a disputed constitution that has led to the country’s worst political crisis in two years.

Addressing the nation on Thursday night, he called for dialogue and offered sympathy for recent deaths of protesters, but  offered few concessions and dismissed his political opposition.

His speech prompted immediate angry reactions from protesters in Cairo’s Tahrir Square and elsewhere, who yelled “Leave!” and chanted other anti-Morsi slogans.

Morsi proposed a meeting on Saturday with political leaders, “revolutionary youth” and legal figures to discuss the way forward, but a leading activist group rejected the offer, and fresh demonstrations were called for Friday.

The “April 6” movement, which played a prominent role in igniting the revolt against former President Hosni Mubarak, said on its Facebook page that Friday’s protests would deliver a “red card” to Morsi.

The deepening political crisis began after Morsi issued a decree on November 22 granting him wide-ranging powers which are not subject to judicial review.

Protests reached a peak on Wednesday, and seven people were killed overnight and more than 770 were injured during hours of clashes outside the presidential palace. Supporters of the president attacked a group of opposition protesters staging a peaceful sit-in, using firebombs, clubs and guns, according to witnesses.

“I call for a full, productive dialogue with all figures and heads of parties, revolutionary youth and senior legal figures to meet this Saturday.”

As Morsi was wrapping up his speech, protesters stormed the Cairo villa housing the headquarters of the Muslim Brotherhood which backed him in the June presidential election.

“Two hundred thugs went to the headquarters. Security tried to prevent them, but some got through the back door, ransacked it and set it on fire,” Mahmud Ghozlan, a spokesperson for the group, said.

The unrest has turned into the worst political crisis of Morsi’s five-month-old tenure. Protesters have camped out for days outside his palace, and in Cairo’s Tahrir Square.

The army on Thursday ordered the square in front of the presidential palace cleared of protesters from both sides, deploying tanks and setting up barbed wire.

“I hope that Mr Morsi will realise that the situation is very bad … Support for the opposition [is ] increasing … and the nation itself is in danger” Abdullah al-Ashaal, a professor of international law at the American University in Cairo and a critic of the president, told Al Jazeera.

Opposition leaders have called on Morsi to delay a constitutional referendum planned for December 15, and to revoke his decree. Morsi did say he “would not insist” on keeping the most controversial provision, article 6, which shields his decisions from review.

But he said the referendum would proceed as planned, so that “people can have their say”.

“Let them vote yes or no,” Morsi said.

He said he would supervise the formation of a new constituent assembly if the draft is rejected.

Critics say the 100-member panel that drafted the document was dominated by Islamists and unrepresentative of Egyptian society. Nearly two dozen members, including liberals and representatives of the Coptic Church, have resigned over the last few weeks.

Despite the opposition, though, the draft is widely expected to be approved. It has the support of the Muslim Brotherhood, by far the best-organised political force in Egypt, and several other Islamist factions.

Leading opposition figures, including Mohamed ElBaradei, Hamdeen Sabbahi and Amr Moussa, blamed Morsi for Wednesday’s deaths, which many witnesses said occurred after protesters loyal to the president charged the opposition.

Morsi has insisted that the violence is being caused by a minority of protesters who receive “black money” and weapons from unnamed parties.

“They took advantage of the situation,” he said, without elaborating.

Senior officials from the Muslim Brotherhood have spent the last two weeks insisting that members of Mubarak’s regime are trying to overthrow Morsi – though none have been able to describe any specific plots.

Seven of Morsi’s senior advisers have resigned in the past two weeks, including four since Wednesday’s violence.

For his part, US President Barack Obama expressed “deep concern” on Thursday over the events in Egypt, in a call to his counterpart Morsi, the White House said in a statement.

Obama told Morsi that it was “essential for Egyptian leaders across the political spectrum to put aside their differences and come together to agree on a path that will move Egypt forward”, according to the statement. 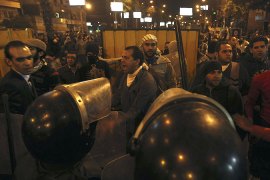 At least four people killed and 300 others injured as supporters and opponents of President Morsi clash in Cairo.