A one-metre-high tsunami has hit Japan’s northeast coast following a strong earthquake, according to the country’s meteorological agency.

The wave was recorded on Friday in Ishinomaki, a city in Miyagi prefecture that was badly hit by the tsunami of March 2011, which killed thousands.

Although emergency announcements repeatedly urged all near the coast to flee to higher ground, the Japan Meteorological Agency lifted a tsunami warning soon after.

The Japan Meteorological Agency said the earthquake, with a preliminary magnitude of 7.3, struck in the Pacific Ocean off the Miyagi coast at 08:18GMT.

The epicentre was 10km beneath the seabed.

Mike Firn, reporting for Al Jazeera in Tokyo, said that buildings as far as in the capital Tokyo swayed for at least several minutes, but that high-speed trains were running soon after the quake.

“This time, it was a 7.3, no reports of major damage…the prime minister, Yoshihiko Noda, he cancelled a news conference to head back to his office and oversee the situation,” said Firn.

Sayaka Matsumoto, communications officer at the Japan Red Cross, told Al Jazeera that she felt “quite [a] large shake” at her organisation’s headquarters in Tokyo.

A 75-year-old woman fell and was injured while evacuating to flee from the tsunami, public television broadcaster NHK reported. It said a child was reportedly injured in the Miyagi city of Sendai. Miyagi police said they
could not confirm those reports.

Shortly before the earthquake struck, NHK broke off regular programming to warn that a strong quake was due to hit.

More than an hour after the quake struck, an unnamed official from the Japan Meteorological Agency, speaking on national television, continued to warn people to stay away from the coast.

The tsunami alert extended from the tip of the main island of Honshu nearly down to Tokyo, though the warning for the area most likely to be hit was only for the Miyagi coast.

The magnitude-9.0 earthquake and ensuing tsunami that struck the northeastern Japan on March 11, 2011, killed or left missing some 19,000 people, devastating much of the coast.

All but two of Japan’s nuclear plants were shut down for checks after the earthquake and tsunami caused meltdowns at the Fukushima Dai-Ichi nuclear plant in the worst nuclear disaster since the 1986 Chernobyl disaster.

Immediately following Friday’s quake, there were no problems at any of the nuclear plants operated by Fukushima Dai-Ichi operator Tokyo Electric Power Co, a TEPCO spokesman, Takeo Iwamoto, said.

The two jets that were in the air went to other airports and all seven flights scheduled to go to Sendai
for the day were cancelled, he said. 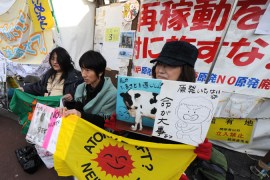 As the first anniversary of the Fukushima nuclear disaster approaches, we examine Japan’s contradictory energy policies. 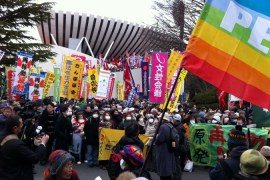 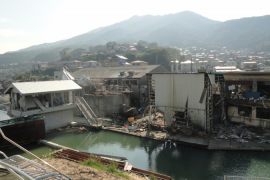 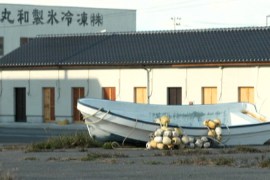