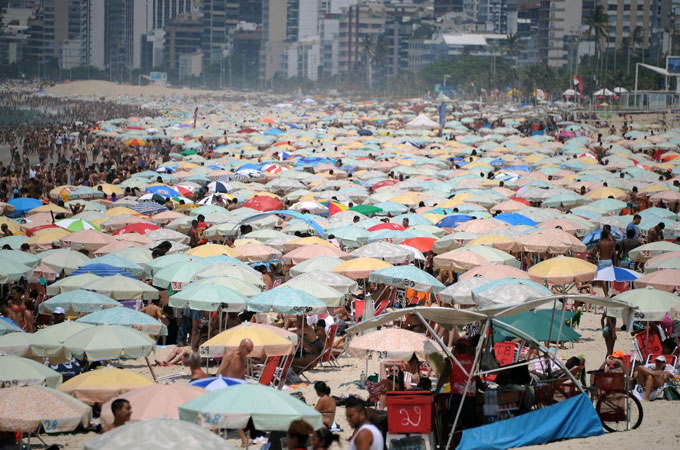 People search for shelter on the sands on Ipanema beach in Rio de Janeiro as the temperature rises over 40C. [AFP]

While winter storms cause chaos across parts of North America, the weather couldn’t be more different to the south of the equator. Some parts of Brazil have been sweating it out as we approach the New Year festivities with record breaking heat for some.

In Rio de Janeiro, locals and tourists flocked to the sunny beaches as temperatures exceeded 40 Celsius marking the hottest start to summer in nearly 100 years. Even the world famous Copacana beach was unable to provide little relief from the sweltering sunshine as the mercury reached 36.5 Celsius.

It certainly wasn’t a case of the snow lying, deep and crisp and even (on the feast of Stephen, otherwise known as Boxing Day) as the Christmas carol goes. December 26 in Rio in fact proved to be the hottest day here since records began in 1915 with a high of 43.2 Celsius.

The previous record for the hottest day was 41 Celsius. Rio’s average temperature is around 28 Celsius, and highs around the mid 30’s are perfectly normal.

The heatwave looks set to continue into the New Year and some climate expects expect 2013 to be one of Rio’s hottest summers ever with the possibilities of more record breaking heat to come.

Meanwhile, records are also being set north of the equator. The winter storm that caused widespread disruption across the northeastern US has been just as problematic across eastern Canada. According to Environment Canada, up to 50cm of snow fell in Montreal, beating the previous one-day record of 43cm.