Egypt’s opposition has said it will keep fighting the Muslim Brotherhood-backed constitution after the group, the main faction backing the charter, claimed it passed with a 64 per cent “yes” vote in a referendum.

The opposition alleged vote fraud on Sunday and demanded an investigation – a sign that the referendum will not end the turmoil that has roiled this country for nearly two years since the uprising that ousted Hosni Mubarak.

Many Egyptians, especially the tens of millions who live in extreme poverty, had hoped the new constitution might usher in a period of more stability.

A heated political debate over the past month leading up to the referendum at times erupted into deadly street battles.

Security was tightened around the Egyptian presidential palace, but there were no mass opposition demonstrations on Sunday after the unofficial results came out.

Renewed violence and political tensions have further imperiled Egypt’s already precarious economy, reeling from dwindling resources and a cash-strapped government whose plans to borrow from the International Monetary Fund had to be pushed back.

The finance ministry said on Sunday the budget deficit reached $13bn in the five months from July-November, about 4.5 per cent higher compared to the same period last year.

Official results of the referendum are not expected until Monday.

If the unofficial numbers are confirmed, it will be a victory for President Mohamed Morsi, who is from the Brotherhood.

Al Jazeera’s Rawya Rageh, reporting from Cairo, said that while the results were so far unofficial, the Muslim Brotherhood’s figures on elections have usually been close to accurate. She said that the low turnout figures, however, were of concern to both camps.

“Some 30 per cent only of eligible voters turned out to vote in both rounds, once again raising questions of how the leadership of both the opposition and the Islamic camp have failed to appeal to the public and get them to vote in the first place,” she said.

‘Not the end game’

The opposition allegations look likely to prolong the fight. Beyond allegations of fraud, the opposition will likely challenge new laws issued on the basis of the constitution as well as Morsi’s economic policies.

“The referendum is not the end game. It is only a battle in this long struggle for the future of Egypt,” said the National Salvation Front, the main opposition group. “We will not allow a change to the identity of Egypt or the return of the age of tyranny.”

The opposition claims the new constitution seeks to enshrine Islamic rule in Egypt and accuses its backers of trying to monopolise power.

The latest political battle began with Morsi’s November 22 decrees that gave him powers to protect the panel writing the constitution and dismiss the country’s top prosecutor, a holdover from the Mubarak era.

Although Morsi subsequently rescinded the powers that gave him immunity from judicial oversight, his decision to replace the prosecutor general was viewed by many in the judiciary as trampling over their powers.

Hundreds of prosecutors held a rally on Sunday demanding the new, Morsi-appointed prosecutor general quit, days after he retracted his resignation claiming it was rendered under pressure.

Adding to the anxiety, state television reported on Saturday amidst voting on the referendum that the central bank governor had resigned, then retracted the report. 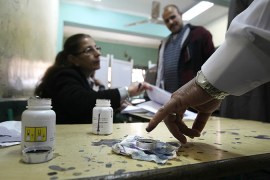 Final round of voting is underway on the new Islamist-backed charter that critics claim is polarising the nation. 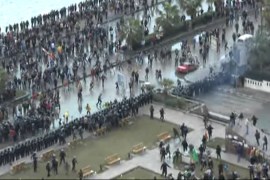 Rival protesters fight on streets of Alexandria over controversial draft constitution to be put to vote on Saturday.