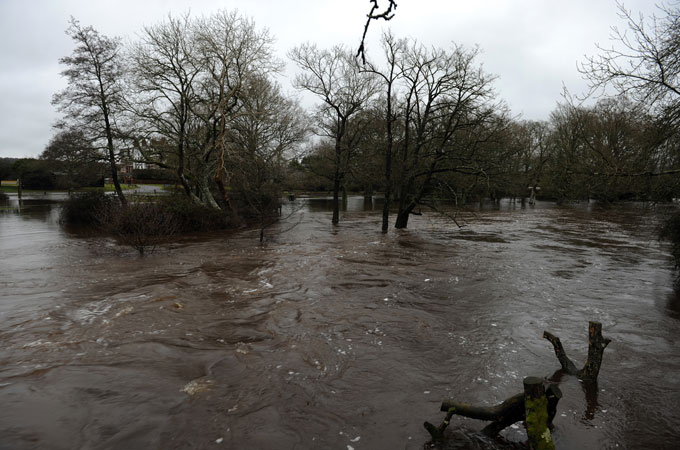 Many rivers have overflowed their banks, including the Lymington River in the village of Brockenhurst, Hampshire, southern England. [EPA]

Christmas preparations across parts of the UK have been severely dampened by torrential rain which has resulted in widespread flooding. The rain has eased now, but there is more to come as the country gets ready for what looks likely to be a wet Christmas.

Road and rail travel has been badly hit as many rivers burst their banks. There were at least two landslides in the fishing port of Looe in Cornwall and the village of Hannafore was cut off in the process.

Southwest England was worst hit and at one stage there were four severe flood warnings in force. Plymouth had 57mm of rain on Saturday, with Liscombe in Somerset recording 62mm. Meanwhile, Swansea in South Wales had 56mm of rain in 24 hours.

There are still over 200 flood warnings in force across England, Wales and Scotland, with one severe warning still in place for Cornwall. There is currently a brief respite with the heaviest rainfall now sitting across Scotland, but more rain is expected in southwest England on Christmas Eve.

The concern remains that despite the fact that the flood waters have eased quite quickly in the southwest, when the rain does return, it will again fall on saturated ground. As a result, the floodwaters are likely to return just as quickly as they went.

The rivers remain in a state of rapid response. As such, Santa may well benefit from swopping his sleigh for a boat when he visits the UK.