The daughter of South Korea’s former military ruler is projected to win the country’s presidential election, putting her on track to become the South Korea’s first female head of state although her advantage was narrow.

A win on Wednesday for the 60-year old conservative Park Geun-hye would see her return to the presidential palace where she served as her father’s first lady in the 1970s after Park’s mother was assassinated by a North Korean-backed gunman.

More than three hours after polling stations closed and with more than 75 per cent of the national vote counted, local media declared Park “certain” of claiming victory over her left-wing challenger Moon Jae-in.

Park was leading with 51.5 per cent of the vote over Moon’s 48 per cent, but there was no formal concession or claim of victory from either side.

“As the actual vote started to be counted . . . the lead for Park has never looked in trouble. She started at 15 percentage points, it now stands at about three per cent … with more than three quarters of the vote counted,” reported Al Jazeera’s Harry Fawcett from Seoul.

Despite freezing temperatures that hovered around -10 degrees celsius, the election was marked by a high turnout of around 75 per cent, compared to 63 per cent in the 2007 presidential poll.

Park is looking to make history by becoming the first female president of a male-dominated nation, and the first to be related to a former leader.

She is the daughter of one of modern Korea’s most polarising figures, the late leader Park Chung-Hee, who is both admired for dragging the country out of poverty and reviled for his ruthless suppression of dissent during 18 years of autocratic rule.

Moon, who was chief of staff to the late left-wing president Roh Moo-Hyun, is a former human rights lawyer who was once jailed for protesting against the Park Chung-Hee regime.

Both candidates’ campaigns highlighted the need for “economic democratisation” – a campaign term about reducing the social disparities caused by rapid economic growth – and promised to create new jobs and increase welfare spending.

“The issues include the country’s economy, talk about measures to address a low birth rate, questions of unemployment, the wealth income gap, and social injustice,” Maass said.

The elected president will face numerous challenges, including a belligerent North Korea, a slowing economy and soaring welfare costs in one of the world’s most rapidly ageing societies.

Moon has been more aggressive in his proposals for reining in the power of the giant family-run conglomerates, or “chaebol”, that dominate the economy and there are significant differences on North Korea.

While both have signalled a desire for greater engagement with Pyongyang, Park’s approach is far more cautious than Moon’s promise to resume aid without preconditions and seek an early summit with North Korean leader Kim Jong-un.

Park has promised strong leadership that would steer the country through the challenges of global economic troubles.

“I have no family to take care of and no children to pass wealth to. You, the people, are my family and your happiness is the reason that I stay in politics,” Park, who has never been married, said in a televised press conference on Tuesday. 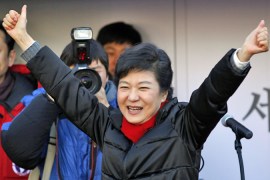 The 65-year-old politician’s career has been marked by tragedy, triumph and a scandal that led to her eventual downfall. 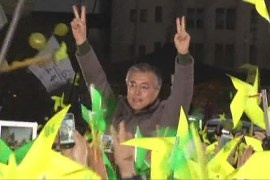