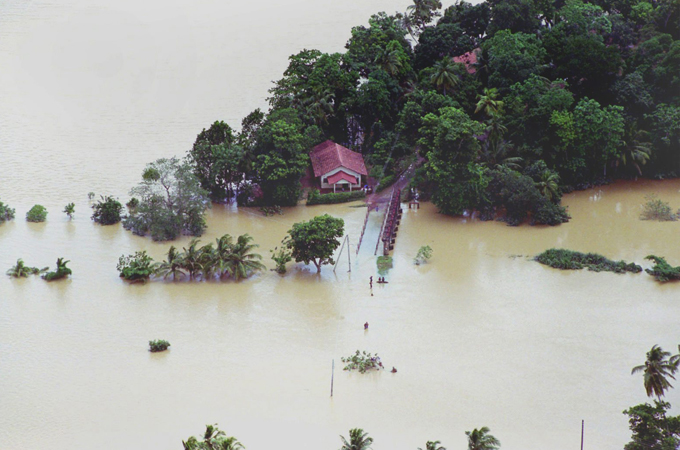 A view of the Sri Lankan town of Ratnapura in May 2003 after the worst flooding in 56 years. More than 300 people died. [EPA]

Two days of heavy rain across Sri Lanka has caused floods and landslides. At least 18 people have died and nearly 10,000 evacuated from their homes.

Flood warnings remain in force across 10 of the country’s 25 districts. According to the Disaster Management Center (DMC) nearly 1,800 families have been moved into 29 shelters.

In all, around 21,000 people have been affected by the floods and landslides. Around 600 homes have been destroyed or damaged.

A number of reservoirs are full or overflowing and many have opened spill gates in attempt to relieve the pressure.

Kurunegala, the capital of the North Western Province, recorded 315mm of rain and here the water level remains dangerously high. So much so, that the Sri Lankan Navy has been deployed in order to conduct rescue operations.

The army and air force are also involved in the relief effort and emergency healthcare is being provided around the clock.

Further showers are expected over the next few days. That brings with it the threat of more landslides, but any showers should be lighter and not as prolonged as of late. The heaviest rain is likely to be in exposed northern and eastern parts of the country.