Clashes between rebels and armed Palestinians loyal to Syrian President Bashar al-Assad have continued in a Damascus neighbourhood inhabited by many Palestinian refugees.

Residents in Yarmouk camp said several mortar rounds landed in the neighbourhood on Tuesday and gunfire echoed around the area. Locals said there were no Syrian government troops in the camp and that most of the fighting was between opposition fighters and gunmen from the Popular Front for the Liberation of Palestine – General Command (PFLP-GC).

Activists said fighter jets bombarded the area and posted footage online purporting to show smoke billowing in the sky after the attack.

Government troops have been deployed outside the camp, and were preventing anyone from entering.

Tensions have increased after a regime air raid killed at least eight people on Sunday. Tens of thousands of the residents have fled the violence rocking the 2.1 square-kilometre area.

“Our conservative estimate would be that at least 50 per cent of the people living in the Yarmouk suburb have left or are leaving, taking refuge in other parts of Damascus, UNRWA schools and facilities or leaving altogether,” Sami Mshasha, a spokesman for the United Nations Relief and Works Agency (UNRWA), said.

About 150,000 registered Palestinian refugees live in the area, in addition to Syrians displaced from the Israeli-occupied Golan heights, and, in recent months, nearby Damascus neighbourhoods where fighting has been intense.

Rebels have launched an offensive to drive the PFLP-GC out of the area, 8km from the city centre, as they try to push deeper into the capital in a bid to topple the Assad regime.

Activist Abu al-Sakan said that while the army and pro-regime fighters had retreated, the rebel fighters were braced for more violence.

“We cannot say anyone has gained control yet,” Sakan told the AFP news agency. “There are clashes and at any moment the army could advance.”

“The government does not want the rebels to set up base or control territory so close to the city centre,” she said. “From Yarmouk, it’s quite close really to the centre of Damascus, the powerbase of the Assad government.”

Pro-regime newspaper Al-Watan reported the army was gearing up for a major assault on Yarmouk.

“Soldiers have massed in large numbers and are preparing a military operation to cleanse the camp,” the paper said.

On Monday, Syrian Foreign Minister Walid al-Muallem claimed the clashes were triggered by the al-Qaeda-linked Jabhat al-Nusra group, which was designated by the US administration as a terrorist organisation last week.

Al-Muallem warned Palestinians inside the camp not to harbour “terrorist fighters”.

UNRWA said it was “gravely concerned” for the Palestinian refugees in Yarmouk who “have experienced particularly intense armed engagements involving the use of heavy weapons and aircraft”.

The opposition says more than 40,000 people have been killed since the Syrian uprising began in March last year. More than 500,000 others have fled to neighbouring countries and many more have been displaced within the country. 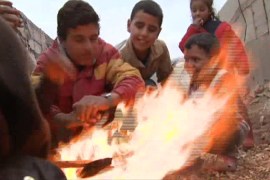 Refugees suffering in squalid camps in Lebanon prepare for worse conditions as colder weather sets in. 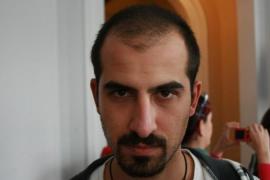 Concerns over fate of Syrian prisoner

Supporters of software engineer call for his release after reports of him being held in a military prison. 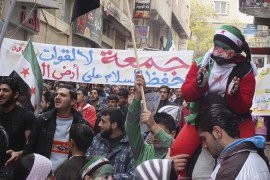 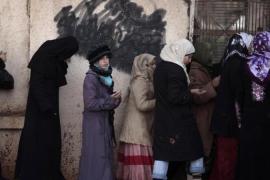