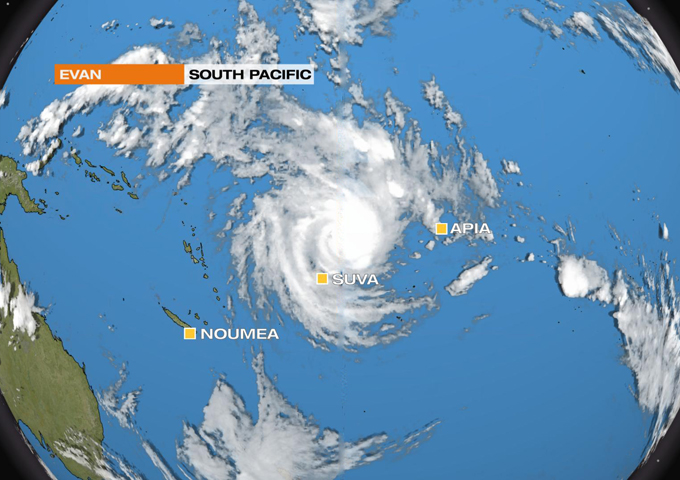 Fiji is next as Cyclone Evan moves toward the tiny island nation.

The last three days have proven devastating for the small islands of Samoa. Cyclone Evan pounded the residents with strong winds and heavy rain mid-week.

Approximately 195,000 residents are now without power as the power plant was completely destroyed by the cyclone. It is expected to be more than 2 weeks before power will be restored.

While the number of casualties has been fairly low, the destruction across the island has been devastating. Homes and business have been lost while flooding has left many low lying areas knee deep in mud.

At the Faleolo International Airport in Apia, the departures lounge roof collapsed, forcing a temporary closure to the facility. As a result Air Pacific cancelled all flights on December 14th and 15th.

As the storm moved away and skies began to clear, there were still some 4,500 people were living in shelters. Approximately 1,000 homes had been destroyed.

As Cyclone Evan moved southwest, the islands of Wallis and Futuna were being affected on Saturday. These smaller islands only have a population of 15,000, but are extremely susceptible to what the power of Evan can unleash.

By Sunday, evacuations were continuing across Fiji and the major airports had cancelled flights. From Sunday evening through Monday evening Fiji will be seeing the force of Evan.

Winds are expected to increase to 205kpm with higher gusts of 250 as the eye of the storm tracks just north then west of the islands.

By late Tuesday, Evan is expected to have moved to the southwest of Fiji.