Russia has denied that its deputy foreign minister said that Syrian President Bashar al-Assad was losing control of his country.

The Russian foreign ministry said in a statement on Friday Mikhail Bogdanov did not say that “an opposition victory can’t be excluded”.

The statement said Bogdanov was simply citing the stance of the Syrian opposition while giving a speech on Thursday.

“We would like to remark that he [Bogdanov] has made no statements or special interviews with journalists in the last days,” Alexander Lukashevich, the ministry spokesman said in a statement on Friday.

Lukashevich confirmed that the hearing with the Social Chamber, where Bogdanov’s comments were recorded, had taken place but said his remarks focused on Moscow’s stance on the crisis.

“Bogdanov reiterated Russia’s position there is no alternative to a political solution in Syria, based on the final
communique of the Action Group which was approved by consensus at a ministerial meeting in Geneva,” the statement said.

In what analysts said were the clearest sign that Moscow was preparing for possible defeat of its ally, Bogdanov said: “One must look the facts in the face. The regime and government in Syria is losing control … Unfortunately, a victory of the Syrian opposition cannot be ruled out.”

The US seized on Bogdanov’s comments, saying Russia is “waking up to the reality” and analysts viewed the diplomat’s statement as Russia’s attempt to begin positioning itself for Assad’s eventual defeat.

The comments came on the same day that NATO chief also said that he believed Assad’s government was nearing “collapse”.

“I think the regime in Damascus is approaching collapse,” he told reporters after a meeting with the prime minister of the Netherlands, Mark Rutte, at the military alliance’s headquarters in Brussels.

“I think now it is only a question of time.”

Rasmussen said the reported use of Scud missiles by the Syrian government showed “utter disregard” for the lives of Syrian people.

Scud missiles “are weapons of terror,” said Riad Kahwaji, founder of the Institute for Near East and Gulf Military Analysis (INEGMA).

Aaraba Idriss, a former first lieutenant who defected 10 months ago, said members of his former battalion told him they fired five Scud missiles for the first time on Monday from their location in Nasiriyeh on the highway between Damascus and the central Syrian city of Homs, according to the AFP news agency.

Idriss said the “Golan-1 missiles were either Russian-made or Russian modified” and had a range of up to 300km.

“It is known that Scuds are strategic, long-range missiles and are not suited for use against armed terrorist gangs,” the ministry said. 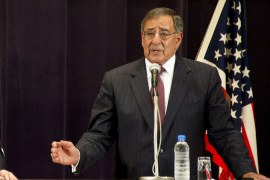 Comments by NATO’s senior military commander were first to confirm that the missiles have come “fairly close” to Turkey. 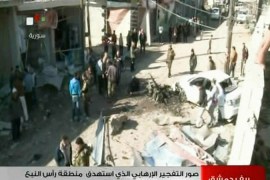 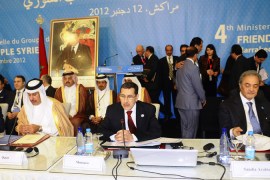