UN climate talks in Doha have come to a point of agreement on the extension of the Kyoto protocol, despite an objection from the Russian Federation.

After 36 hours of non-stop negotiation, delegates from nearly 200 nations in the Qatari capital agreed on Saturday to extend the protocol limiting greenhouse-gas emissions until 2020.

Al Jazeera’s Nick Clark, reporting from the conference venue, said Russia’s objection showed that despite the agreement, “not everybody is totally happy” with the outcome of the two-week-long conference.

The extension of the 1997 UN-backed Kyoto Protocol will keep it alive as the only legally binding plan for combating global warming even though it will cover developed nations whose share of world greenhouse-gas emissions is less than 15 per cent.

The 27-member European Union, Australia, Switzerland and eight other industrialised nations agreed to the binding emission cuts by 2020. Each signatory had already legislated individual targets.

The US has refused to ratify Kyoto. The protocol also excludes major developing polluters like China, the nation with the highest rate of pollution, and India.

“It is a modest but essential step forward”, Connie Hedegaard, European climate commissioner, said at the conclusion of Doha Climate Gateway.

A statement released by the office of Ban Ki-moon, UN secretary-general, said while he supported the outcome of the Doha conference as a positive step, he “believes that far more needs to be done and he calls on governments, along with businesses, civil society and citizens”.

Kumi Naidoo, executive director of the environmental activist group Greenpeace, said civil society was especially disappointed with the outcome of the talks.

Speaking to Al Jazeera in Doha, he said with “no emissions targets anywhere near what the science” is calling for, what the agreement delivered was “at best, baby steps”.

He said that despite the presence of delegates from key global players, “the winners have largely been” the fossil-fuel industries – oil, coal and gas companies.

The talks, scheduled to end on Friday, were extended into Saturday as delegates from rich and poor nations disagreed on funding.

Qatar, the conference’s host, had originally introduced the idea of extending the Kyoto Protocol, which would have expired by the end of the year.

It also suggested putting off until 2013 a dispute about demands from developing nations for more cash to help them cope with global warming.

The issue of funding to help poor countries deal with the fallout from global warming and convert to clean energy sources complicated the haggling by envoys.

Developed countries are being pressed to show how they intend to keep a promise to raise climate funding for poorer nations to $100bn per year by 2020 – up from a total of $30bn in 2010-2012.

Developing countries say they need at least another $60bn between now and 2015 – starting with $20bn from next year – to deal with a climate change-induced rise in droughts, floods, rising sea levels and storms.

But the US and the EU have refused to put concrete figures on the table for 2013-2020 funding, citing tough financial times. 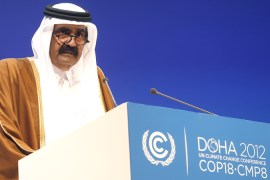 As warnings escalate over the perils the planet faces, we ask what the COP18 summit has achieved. 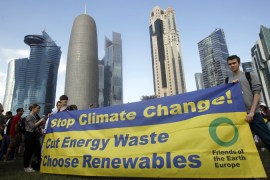 Key points of the Doha deal

Key points of the climate package deal, dubbed the Doha Climate Gateway, include an extension of the Kyoto Protocol. 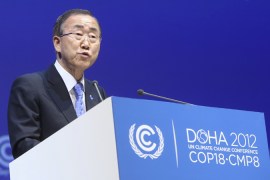 Counting the cost of climate change

A look at the nations setting up funds to try and save the planet as the COP18 UN Summit in Doha enters its last lap. 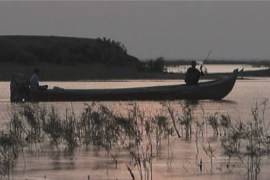