The Australian radio station behind a prank phone call to a London hospital that was treating Prince William’s pregnant wife, the former Kate Middleton, has said it had done nothing wrong and no one could have foreseen the tragic outcome.

Jacintha Saldanha, 46, the nurse who was duped by the station’s hoax call, was found dead early on Friday in a suspected suicide at nurses’ housing provided by London’s King Edward VII hospital. where Middleton, was being treated for acute morning sickness this week

The hoax, in which the radio hosts – posing as Britain’s Queen Elizabeth and Prince Charles despite Australian accents – successfully inquired after Kate’s medical condition, has made worldwide headlines.

Rhys Holleran, Southern Cross Austereo chief executive, said in Melbourne on Saturday that the company would work with authorities in any investigation, but that it was too early to draw conclusions.

He said he was “very confident” that the radio station had done nothing illegal.

“This is a tragic event that could not have been reasonably foreseen and we are deeply saddened by it. Our primary concern at this stage is for the family of Nurse Saldhana.”

The pair will stay off the air indefinitely, he said.

The Twitter accounts of Greig and Christian were removed shortly after news of the tragedy in London broke.

Austereo said all advertising on 2DayFM had been shelved until at least Monday in a mark of respect to advertisers whose Facebook pages were inundated with thousands of hate messages.

Meanwhile, British police disclosed that Saldanha was originally from India and released a grainy photo of her.

Saldanha had lived in Bristol in southwestern England with her family for the past nine years, Scotland Yard confirmed.

Police said her death is being treated as “unexplained”, though they said they did not find anything suspicious.

A coroner will make a determination on the cause next week.

UK police have made no connection between Saldanha’s death and the prank call, but people from London to Sydney have been making the assumption that she died because of stress from the call.

Australians from Julia Gillard, the prime minister, to people in the street expressed their sorrow on Saturday and cringed at how the hoax had crossed the line of acceptability.

Two prominent Australian firms, the Coles supermarket group and phone company Telstra, said on Saturday that they were suspending advertising with the station. Others were expected to follow suit.

Users of social media sites such as Twitter expressed outrage.

The hoax also raised concerns about the ethical standards of Australian media, as Britain’s own media tries to agree a new system of self regulation and avoid state intervention following a damning inquiry into reporting practices.

Earlier this year 2DayFM was reprimanded by Australia’s independent communications regulator after a radio host talked a 14-year-old girl into revealing on air that she had been raped, prompting community outrage and an advertiser backlash.

So-called shock jock radio announcers are frequently denounced in Australia for their deeply personal and often derogatory attacks on politicians and ordinary citizens. 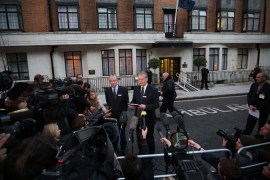