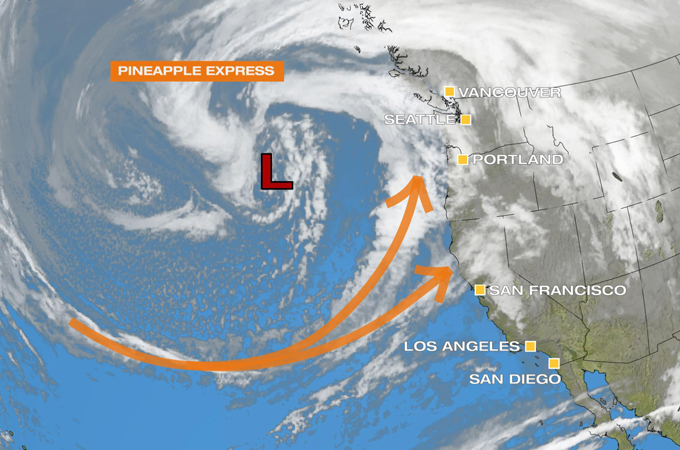 Stormy and very wet weather is in store for the northwestern United States all the way through next week.

What is commonly known as the “Pineapple Express”, is a stream of abundant moisture that runs from the central Pacific to the west coast of the US. The source of the moisture tends to be near the Hawaiian Islands, hence the origin of the nickname.

In order to have this phenomenon there needs to be a deep dip in the jet stream over the eastern Pacific. This allows the atmosphere to dig into the moist, tropical air of the mid-latitudes and send it eastwards, towards California.

California and Oregon have already begun to see the rain in the lower elevations and snow in the Cascade and Sierra Nevada Mountains. Over the next three days, between 200-300cm of rain is expected to fall from Redding, CA to Medford, OR.

This amount of rain in such a short span of time is going to have a significant impact. Warnings for flash flooding, mudslides and landslides have already been issued across the region.

Normally the Pineapple Express is a prolonged event, and this current situation looks to be no different. Heavy rain is expected to fall all the way through Sunday. Then as we start next week, there may be a day or two of clearer skies before it starts again on Tuesday evening.

While the damage from these storms can be devastating, they are also the source of much of the region’s water supply. It is estimated that 30-50% of the average annual precipitation for this region comes from these “Express” events.

Storms like this can occur for the northwestern US any time from November into early spring. The later in the season they occur, the more the flooding. With deep snow pacts already established in the higher elevations, these Pacific storms arriving in early spring will help to melt the snow, causing higher flooding potential.