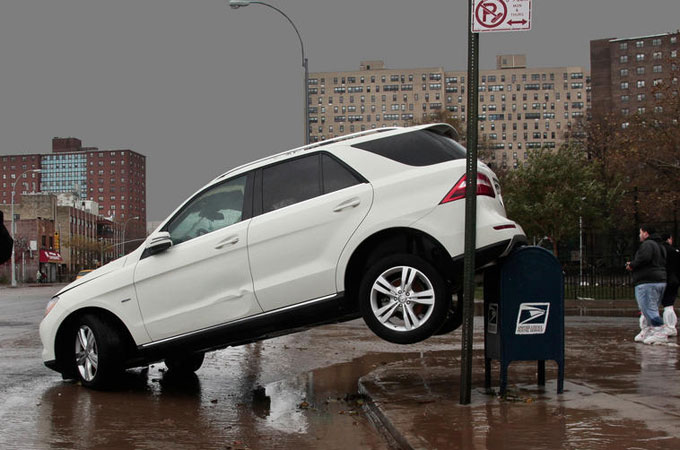 A vehicle lies atop a mailbox in New York after Sandy battered the city. [AP]

As the dust begins to settle after President Obama’s election victory, the thoughts of New Yorkers turn back to more immediate concerns, namely coping with the aftermath of storm Sandy.

As if power blackouts and transport disruption were not enough, a developing storm, known as a ‘nor’easter ‘ is heading towards New York and the battered coastline of New Jersey.

The intensifying area of low pressure is moving along the coast of the Carolinas and as it heads northwards it is expected to deepen to around 990mb. As the storm hits the New York and New Jersey shoreline during the high tide of Wednesday afternoon, forecasters expect winds of up to 90kph.

The wind direction is important, as a nor’easter will drive the winds onshore, adding to the predicted high tide. A storm surge of up to one metre is expected along the coastline of Virginia, Maryland, Delaware, New York and New Jersey.

On top of this, wave heights of 3 to 6 metres are expected, raising fears about the ability of the already battered coastal defences along the Jersey shoreline to withstand any potential inundation. Sandy not only damaged man-made coastal defenses, but also destroyed sand dunes and other natural barriers.

Thankfully, the storm will strike during the neap tides, halfway between the full and new moons. Consequently the tide will be nowhere near as high as when Sandy struck a week ago.

Over the last few days computer models have suggested the storm will take a slightly more easterly track, suggesting the worst of the weather will be offshore.

Nevertheless, the region is bracing itself for severe weather conditions on the two high tides early on Wednesday afternoon and Thursday early morning.

To make matters even more uncomfortable for those without gas or electricity or displaced from their homes, snow is expected across a swathe of the Eastern Seaboard, stretching from northern Virginia through the Delmarva Peninsula to New Jersey, New York and across Connecticut and Massachusetts.

There is much uncertainty regarding potential snowfall, but 2 to 5cm are likely in many areas and computer models indicate the potential for up to 15cm across inland parts of New Jersey.

On Wednesday night, as rain turns increasingly to snow and winds strengthen, the wind-chill could be as low as minus 10C. The strengthening winds will also hamper attempts to restore power.

Anticipating problems at the city’s airports, airlines have cancelled more than 200 flights at La Guardia and JFK International airports in New York and Newark Liberty International in New Jersey.

President Obama was widely praised for his leadership during the immediate aftermath of Sandy’s impact. He may get little rest after his grueling campaign exertions before having to ensure that residents of the battered Atlantic coastline get the assistance they are likely to require after this next storm adds to their woes.