Michael Bloomberg, New York City’s mayor, estimated on Sunday that 30,000-40,000 houses in the city alone had been left unusable by the storm.

Sandy battered 15 states with fierce winds and a huge tidal surge that left at least 113 dead in the United States and Canada, and caused some $20bn in damage.

“It is starting to get cold. People are in homes that are uninhabitable,” New York state governor Andrew Cuomo told a press conference. “We are going to have tens of thousands of people who need housing solutions right away.”

“This is going to be a massive, massive housing problem,” the governor added.

Bloomberg on Sunday compared the crisis to that in New Orleans after Hurricane Katrina hit in 2005.

“I don’t know that anybody has ever taken this number of people and found housing overnight,” the under-pressure New York mayor said.

Tens of thousands fled New Orleans because of the storm and found shelter in other cities. “In this case, people are staying in New York City and it’s a challenge for us,” Bloomberg said.

More than 200,000 meals are already being handed out each day to the elderly and other needy victims in New York. The city is urging the homeless to go to emergency evacuation centres that remain open, and temperatures hovered just above freezing on Saturday night.

Poorer parts of the city, including the Rockaway area and the borough of Staten Island, were worst hit by the storm. Bloomberg was the target of serious complaints by inhabitants when he toured those areas on Saturday.

Bloomberg called off Sunday’s New York international marathon because of protests about the diversion of resources to the event, with so many residents still suffering. Many of the 45,000 contestants nevertheless descended on Central Park on Sunday to run part of the course.

About 730,000 people in New York state still do not have electricity nearly one week after Sandy hit, including 145,000 in New York City, the governor said.

Nassau County, one of the wealthiest parts of the US, is now worst hit in the state, with 266,000 people still in the dark.

Nearly 1.9 million homes and businesses in the US Northeast were still without power on Sunday, nearly a week after Hurricane Sandy hit, the US Department of Energy’s Office of Electricity Delivery & Energy Reliability said in a report.

Cuomo, New York state governor, said that some people may have to wait two weeks to get power back and reaffirmed a vow to make sure utility companies are held “accountable”.

With drivers waiting several hours in queues at gas stations to get fuel, Cuomo and Bloomberg appealed for patience and insisted that deliveries are improving.

In Coney Island, New York, people waited in line for up to six hours to get some of the free petrol that federal authorities have sent to New York to help alleviate shortages.

Many of the petrol stations that are actually open in New York limit drivers to $30 of fuel at a time, barely one-third of a tank for some American cars.

New York subways are almost back to normal and nearly all schools are to reopen on Monday.

Severe problems remain in New Jersey however. Huge lines of cars and people on foot clutching canisters snaked back from gas stations across the northern half of the state. 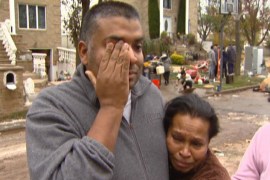 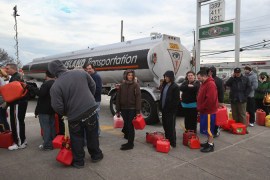 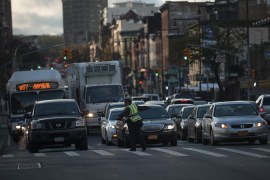 New Yorkers struggle to get around after Sandy

New York’s transport has been crippled by the storm, with the subways flooded and bus services cancelled.