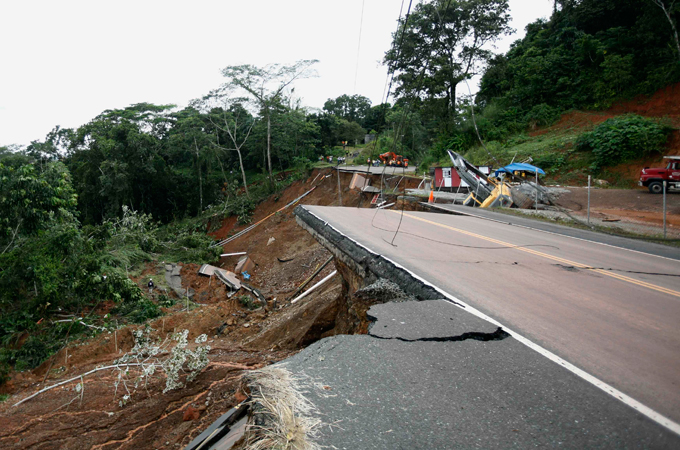 A collapsed road due to a landslide on the outskirts of Colon City, Panama on November 26. [Reuters]

Parts of Panama have been declared disaster areas after days of torrential rain left many regions under water. Landslides have occurred in many places and at least three people are known to have died.

Around 1,000 homes have been flooded across the country after severe storms struck just to the west of the capital, Panama City. The Panamanian government has declared a state of emergency in the districts of Colon, La Chorrera and Capira.

Murky floodwaters surged through streets, submerging homes and vehicles. Over 2,700 people have been displaced.

Many of the homes have floodwaters up to their roofs, and landslides have blocked a number of roads. This includes the main highway that connects the two main cities of Colon and Panama City which collapsed cutting Colon off from the rest of the country.

Thundery showers do remain in the forecast, but the worst does appear to be over now. The weather system that caused the flooding is now easing and moving away to the south. President Ricardo Martinelli has toured the flooded areas and promises to help those affected.