M23 rebels controlling the eastern city of Goma in the DR Congo have said they will not pull out unless their demands are met.

Other demands include release of all political prisoners and withdrawal of the rebel group FDLR from positions it is occupying.

“These are pretty tough [preconditions] and will probably not be met,” said our correspondent.

The Congolese government dismissed the demands, made by M23 political chief Jean-Marie Runiga at a news conference in Goma, as a “farce”, according to the Reuters news agency.

Al Jazeera’s Azad Essa, reporting from Goma, said M23 rebels could be seen in the city and that there were no signs they would pull out soon.

“As it stands, there are a handful of M23 soldiers in the city, and there is no indication as yet of any withdrawal,” he said.

“Goma itself is bustling with activity, though banks and bigger stores remain shut as confusion over the fate of the city remains.”

UN peacekeepers could be seen across the city, though MONUSCO, the peacekeeping mission, says that its patrols started three days ago and have nothing to do with the latest developments, said our correspondent.

M23’s demands came amid optimism that a deal had been agreed between them and the government to stop fighting and withdraw from Goma.

News agencies reported on Tuesday that the head of the Ugandan military, Aronda Nyakairima, had met the rebels’ leader, Sultani Makenga, in the capital Kampala and that he had assured him he would pull out of Goma and Sake.

“We met last night and I communicated to him the decision of regional leaders reached on Saturday and he accepted to pull back his forces out of Goma and Sake and also stop any further advances southward,” Reuters quoted Nyakairima as saying.

Uganda, which shares a border with the DR Congo and has been accused along with its neighbour Rwanda of backing the rebels, is leading efforts to find a solution to the conflict.

With the rebels pushing new demands, fighting is likely to resume and the conflict could suck in neighbouring Rwanda, said our correspondent Peter Greste, reporting from Kampala.

Rwanda said on Tuesday it had been attacked by the FDLR, a rebel group holed up in the DR Congo and is made up of Hutu extremists accused of perpetrating the 1994 genocide.

The genocide left up to 800,000 people dead, mainly Tutsi minority. Known by its French abbreviation, the FDLR fled Rwanda and set up camp in eastern DR Congo after the genocide.

Joseph Nzabamwita, a Rwandan army spokesman, said the military was “fighting” the FDLR which attacked the villages of Cyanzarwe and Bugeshi around dawn.

Nzabamwita said the army had repulsed the rebels, who numbered around 100, and they had scattered.

“As we are talking some are fleeing back to DRC, others deep inside Rwanda,” he said.

There was no immediate indication on casualty numbers or on how long the fighting lasted, which took place in the foothills of the mountains on the DR Congo-Rwanda border.

African leaders, mainly from the Great Lakes region – Uganda, Kenya, Tanzania, Rwanda and DR Congo, called on M23 rebels on Saturday to abandon their aim of toppling the government and leave the city of Goma they captured last week.

Though Tutsi, M23 rebels are Congolese and they take their name from a March 23, 2009, agreement that the Congolese government signed with the CNDP, a rebel group whose fighters were integrated into the national army.

Those fighters mutinied in April 2012 citing poor pay and working conditions before they started fighting the government. 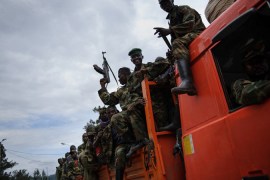 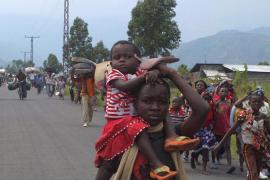 Journey of fear for the displaced of Congo

What has shocked me the most about covering this conflict is the plight the people displaced by the fighting. 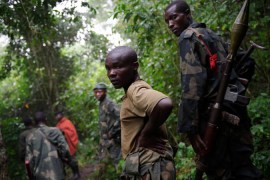 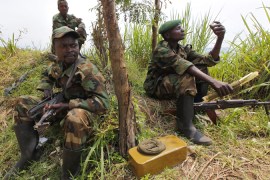 A regional summit in Uganda has given the armed group until Monday to withdraw from Goma and other eastern areas.