Syrian opposition activists say a government air raid on a rebel-held village near the capital, Damascus, has killed 10 children as they played outdoors.

The children went out after a lull in fighting on Sunday in Deir al-Asafir, a village 12km east of Damascus, when fighter jets struck, activists and residents said.

“None of those killed were older than 15 years old. There are two women among 15 people wounded, mostly hit as they were inside the courtyards of their houses,” Abu Kassem, an activist in the village told Reuters news agency.

“There were no fighters inside Deir al-Asafir when the bombing occurred. They operate on the outskirts. This was indiscriminate bombing.”

Abu Kassem said the munitions dropped by the fighter jets were cluster bombs. Other footage showed a row of what appeared to be unexploded small bombs.

Al Jazeera’s Rula Amin, reporting from Beirut in neighbouring Lebanon, said it was difficult to tell what kind of weaponry had been used in the attack but stressed that the pictures were “very strong”.

“It’s going to hit cord with many Syrians and in the Arab world,” she said.

“The residents in the village insist there was a lull in fighting. It’s a village controlled by the opposition. They believe the government was doing this as a vengeance act as the rebels have been making significant advances around that area, in the eastern part of Damascus, taking control of more areas.”

Activists say more than 3,000 children are among more than 38,000 people killed since the uprising against President Bashar al-Assad’s regime began in March last year.

Most foreign reporters have been barred from entering the country legally, making it difficult to independently verify reports of violence from both sides of the conflict.

Syrian authorities made no comment on Sunday’s reported killings, but official media have said the army has been on the offensive to “cleanse” the area of what the government calls terrorists.

Earlier this month, the UN political affairs chief told the Security Council of credible reports that the Syrian military has used cluster bombs in efforts to crush the revolt.

The Syrian army has denied a Human Rights Watch report issued in October that Assad’s forces have used cluster bombs, saying it did not possess such weapons.

Cluster bombs are banned under a 2010 UN treaty, though Syria, like Israel, Russia and the US, have not signed the pact.

As fighting continued on Monday, Syrian fighter jets dropped bombs on the town of Atma, near the Turkish border, activists in the region said.

Sources in the town told Al Jazeera that one bomb landed near the rebels’ headquarters and another one kilometre from a camp housing people displaced by fighting.

Al Jazeera’s Sue Turton, who spent the last few days in Atma before crossing into Turkey, said the town is known to be a hub for rebel fighters and a kind of safe haven where fighters “can get some relaxation before they go back to the frontline”.

It was the first time the regime targeted the town, she said.

Activists also reported that rebels have captured a hydroelectric dam on the Euphrates River following days of fighting.

The Britain-based Syrian Observatory for Human Rights said the Tishreen dam, near the town of Manbij, fell to the rebels before dawn on Monday. 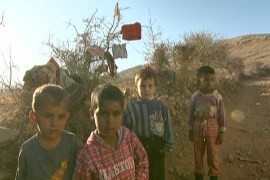 Refugees outside the country doubles from 213,000 to 442,256 since September, as fighting intensifies across Syria. 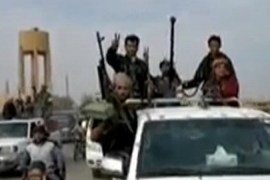 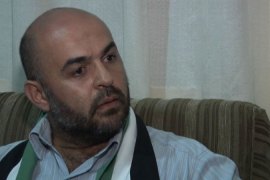 Brazilians of Syrian descent horrified by events in homeleand but remain divided over who to blame.