Australia’s government has apologised to hundreds of victims of abuse within the military, clearing the way for victims to receive compensation.

In an address to parliament on Monday, Stephen Smith, defence minister, acknowledged that soldiers, sailors and member of the air force had suffered abuse, often by superiors under the excuse of toughening up younger recruits, since the early 1950s.

“Young men and women have endured sexual, physical or mental abuse from their colleagues which is not acceptable and does not reflect the values of a modern, diverse, tolerant Australian society,” Smith told parliament.

“On behalf of the government, I say sorry.”

The report detailed 24 allegations of rape that never went to trial.

Smith said senior military leaders were committed to changing a defence force culture which has often turned a blind
eye to abuse and was often hostile to women or those who spoke out or complained about their treatment.

The apology follows an independent report sparked by an incident in 2011, when footage of a female defence academy cadet having consensual sex with a male colleague was streamed online to other cadets without her knowledge.

“That at the time, was said to be an isolated incident,” Al Jazeera’s Andrew Thomas, reporting from Sydney, said.

“But very quickly, other people came forward and said similar sorts of abuse had happened to them while they were in the military.

“The government asked a law firm to conduct a review and over 1,000 people came forward, saying they had suffered some form of abuse.”

General David Hurley, defence force chief, also apologised, saying he recognised “the damage and suffering that has been caused to some”.

The Australian Defence Force has begun addressing these causes through its cultural reform programme,” he said.

Smith said an independent task force would now examine specific allegations and rule on compensation of up to A$50,000 ($52,200) for victims. It will also refer matters to police or the military justice system if there is evidence of a crime. 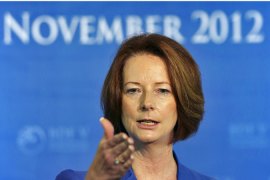