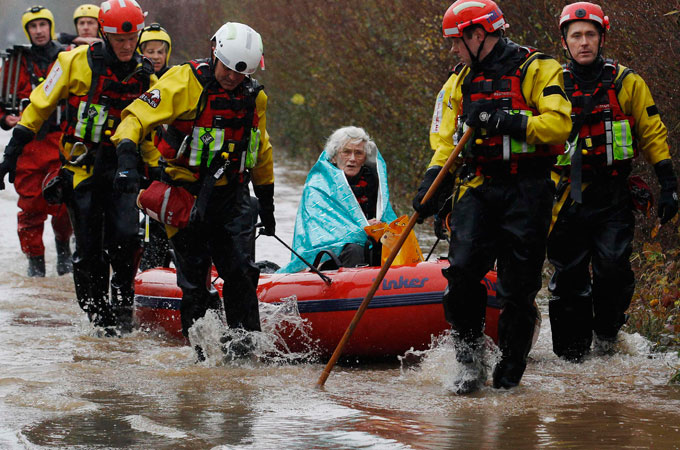 An elderly woman is rescued from flood waters in North Curry, Somerset. [Reuters]

After days of heavy rain, leading to swollen rivers, the last thing the UK needed was another storm. But that is exactly what it got as a deep depression caused widespread flooding and disruption through Saturday and into Sunday morning.

In the most serious incident, a woman in Exeter, Devon was killed when she was hit by a falling tree. Two other people were injured in the incident.

This comes less than 48 hours after a man was drowned after the car he was driving was swept under a bridge as he attempted to ford a stream in Chew Stoke, Somerset.

The weekend storm has seen a combination of torrential rain and strong winds wreak havoc across the Southwest, the Southeast and parts of the Midlands.

The Southwest has experienced the most savage weather with the Environment Agency issuing four severe flood warnings in Cornwall, suggesting an imminent danger to life.  Parts of the region have experienced over 100mm of rain in under a week.

There has been significant transport disruption around the country.  Sections of the M5, M48, M50 motorways were closed because of flooding whilst the M25, the orbital motorway around London, was closed at the QE2 bridge in Kent because of high winds.

The gale to severe gale force winds have also disrupted ferry services across the English Channel.

Rail services have not escaped the bad weather with the service between Exeter and Newton Abbot disrupted by a landslip and the rail operators have warned of likely problems between Taunton, Exeter and Bristol Temple Meads until Monday.

The Environment Agency and Met Office had warned of such events at the beginning of November. After the wettest April to June on record, plus wet spells during July, September and October, river levels were already elevated.

The two organisations predicted river flooding during November and December plus surface flooding as a result of high groundwater levels.

They issued specific warnings for Devon, one of the counties worst affected over the last few days.

Fears for further flooding in the next few days remain high. Another frontal system is expected to bring more rain later on Sunday and into Monday. Although predicted totals are only in the range 10 to 20mm, the critical current situation is such that any rain could cause a rapid deterioration in the situation.