It says 28 workers were in the mine at the time of the accident. Five of those have been rescued.

The blast at the mine, part of the Guizhou Panjiang Group, went off at 0300 GMT and by early evening 18 people were confirmed dead while several others had been rescued.

China has the world’s deadliest coal mine industry, with 1,973 miners killed in accidents last year.

But labour rights groups say the actual death toll is likely to be much higher, partly due to under-reporting of accidents as mine bosses seek to limit their economic losses and avoid punishment.

Safety improvements have reduced deaths in recent years, but regulations rules are often ignored and accidents are still common.

In August, a mine blast in southwestern China’s Sichuan province killed 44 people, the highest single accident toll for the industry in nearly three years. 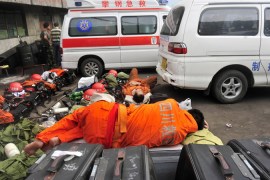 At least 37 miners killed in Sichuan province after explosion at coal mine, the worst Chinese mining accident this year. 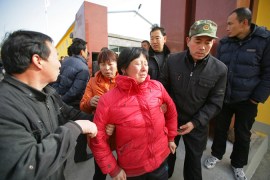 Dozens killed in China mine blast

Death toll rises to 26 as more bodies are found after gas explosion in a coal mine in Henan province. 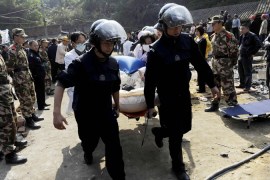 Emergency teams pull all 29 workers from shaft in Sichuan province a day after sudden flood in mine pit.