Syrian rebels have killed at least 28 government soldiers in attacks on three army checkpoints on the main road from the capital Damascus to the northern city of Aleppo, according to an activist group.

Five rebels were also killed in the fighting near the northwest city of Saraqeb on Thursday, which became a key battleground after opposition forces seized the adjacent, strategic town of Maaret al-Numan, the London-based Syrian Observatory for Human Rights, a network of anti-government activists, said.

Meanwhile, government warplanes continued to bomb opposition strongholds across the country, including the northern Damascus suburb of Harasta.

On the other side of Damascus, gunships attacked the neighbourhood of Al-Hajar Al-Aswad, the Observatory said.

In the northwest province of Idlib, fighter jets launched strikes on the towns of Talmanas and Maar Shamarin.

Forces loyal to President Bashar al-Assad have launched a wave of intensive airstrikes this week that analysts say are a response to opposition gains and aimed at “terrorising” civilian populations.

“They are trying to make the civilian population so angry and so scared that it will not be possible for the rebels to find safe havens,” said Riad Kahwaji, head of the Dubai-based Institute for Near East and Gulf Military Analysis.

Separately, in Idlib, opposition forces continued their siege of the Wadi Daif army base. According to Syria’s official television, two people were killed and several others injured in an explosion in the central city of Hama.

Syrian regime forces have also reportedly destroyed one of the biggest bakeries in Aleppo’s Atareb town, killing at least 12 people on Thursday.

“This bakery is the main source of food for the abandoned poor people in this area. The regime destroyed four different bakeries last night, in Kafar Hamra, in Ramoon, in Qadi Askar, and here in Atareb. 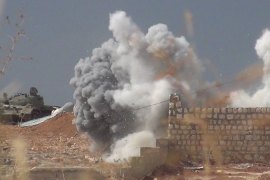 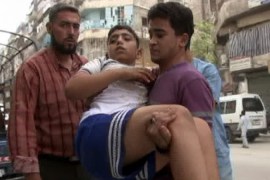 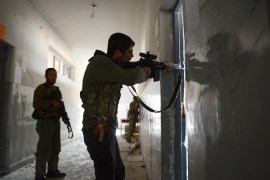