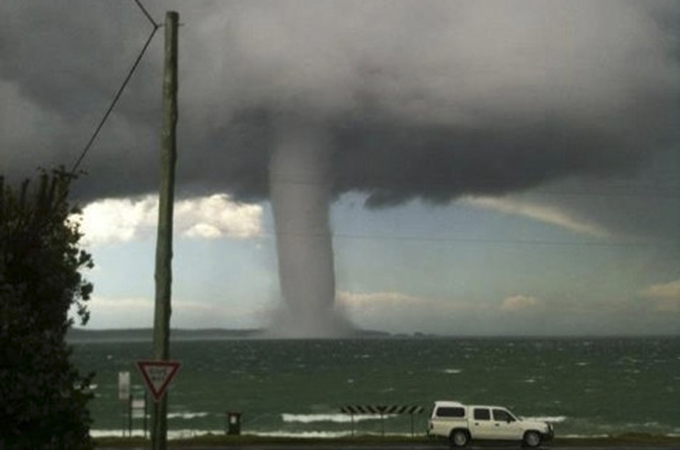 It was a weekend of wild weather across New South Wales, Australia. There were more than 24,000 lightning strikes recorded by the Bureau of Meteorology during the weekend. Rainfall totals of up to 160mm in 24 hours were recorded in some areas and gusts of 100kph were reported.

So perhaps it should have come as no surprise that a giant waterspout was spotted in Batemans Bay, some 225km south of Sydney. It persisted for some time, travelling slowly northwards before dissipating near Maloneys Beach.

Here are some facts about waterspouts:

1.    Waterspouts are similar to tornadoes insofar as they are intense vortices attached to cumulus or cumulonimbus clouds but they remain over water.

2.    The water seen in the funnel has not been ‘sucked up’ from the surface. Rather, it is water that forms from cooled, condensed water droplets.

3.    Waterspouts occur mainly in the tropics but they can occur anywhere.

6.    The world waterspout ‘hotspot’ is the Florida Keys, but the Mediterranean and Baltic Seas also experience them relatively frequently.

7.    Waterspouts are not limited to the oceans. They occur over freshwater bodies too. They are frequently reported over the Great Lakes of North America.

8.    There is a forecasting tool used to predict their occurrence in this region. The Szilagyi Water Index forecasts the development of waterspouts up to two days in advance.

9.    In the northern hemisphere, September is the peak month for their formation.

10.    Strong winds and localised waves make waterspouts a considerable marine hazard and should be avoided at all costs. Winds in their vicinity may reach 100 to 200kph.