Palestinians have taken to the streets across the West Bank in protest at Israeli air attacks on the Gaza Strip, leading to one death in the southern city of Hebron.

A second person died on Monday of wounds sustained from an earlier protest.

Protests broke out in Hebron’s Old City after which Palestinian protesters were pushed back into the centre of the city by Israeli security forces.

“He was going to his house, there were clashes nearby and he might have been protesting. He got shot once in the leg, one in the arm, one in the chest and one in his head,” a Hebron resident told Al Jazeera.

“Now the IDF are in the middle of the city and they are throwing teargas everywhere. Most of the entrances to the city are blocked. They are shooting rubber-coated steel bullets and live amunition. It’s getting crazy here.”

Amateur videos show Palestinian youth shooting fireworks in the middle of the city, prompting a violent response from Israeli soldiers, according to witnesses.

“Rushdi al-Tamimi died today from his wounds,” Ahmed al-Betawi, director of the Ramallah hospital, said. Fellow activists said he was 31.

He was shot with a live bullet during a demonstration in support of Gaza in the village of Nabi Saleh,” said Abir Kopty, spokeswoman for a coalition of grassroots activists known as the Popular Struggle Committees.

“He was shot in the back and the bullet penetrated his stomach.”

Also in the West Bank, near the settlement of Ofra in the Ramallah district, Palestinian and international protesters attempted to block the settler access road which snakes through the West Bank.

Palestinians with banners attempted to block the road, soldiers who arrived on the scene fired tear gas to disperse the protesters.

In the Ramallah district, Palestinian youths cut the fence to the Ofer military camp and put up the Palestinian flag inside the camp which is also used as a prison and military court in the West Bank.

Residents of the city of Orif, near Nablus, said a group of settlers from a nearby settlement came to the mosque before dawn, poured petrol on an old carpet near the mosque’s door, and set it ablaze.

“Before the dawn prayers, 30 minutes before, when we entered, we were afraid that there would be settlers in the neighbourhood as usual, every night they are here until the morning,” Issam al-Safadi, an Orif resident, told Reuters news agency.

“When we came to the mosque we found the door was burnt, they’d tried to enter but the door was shut and here they have burnt the carpet.”

Israel launched an extensive aerial campaign on Gaza on Wednesday with the declared goal of deterring Hamas from launching rockets at its southern communities.

The salvoes have intensified, and are now displaying greater range.

Hamas, says its cross-border attacks have come in response to Israeli air strikes against Palestinian fighters in Gaza. 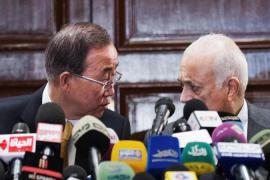 With Gaza’s death toll at 121, the UN chief calls for end to violence in a meeting with Israeli and Palestinian leaders. 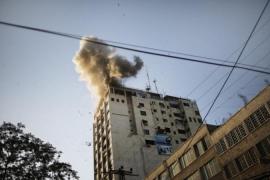 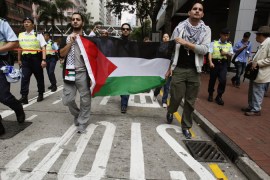 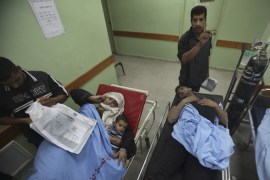 Already stretched thin before this latest conflict, hospitals in the Gaza Strip face a “disaster” if fighting continues.